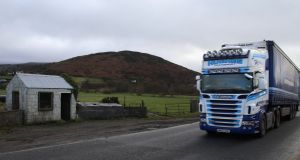 Three officers who worked on the Border at the time of repeated IRA attacks on customs checkpoints in the 1970s said it would be impossible to impose a customs border and not have checks at the Border.

It was the deadliest attack on a Border customs post during the Troubles.

Customs posts along the Border were frequently the target of republican attacks during the Troubles. There were 484 bombings and other incidents recorded at customs posts between 1969 and 1992, according to the Northern Ireland Land Boundary 1923-1992, a book published by the then HM Customs & Excise in 1993.

The UK’s prime minister has proposed taking Northern Ireland out of the EU customs union but leaving the North aligned with EU single market rules for agrifood and industrial goods, but only if approved by the DUP.

Mr Johnson wants to keep Northern Ireland in a customs union with the rest of the UK but avoid checks “at or near the Border” using technology, a streamlined customs system, exemptions for small companies, trusted trader schemes for large companies and other concessions from EU customs rules.

Any physical checks could be carried out at business premises or unspecified “designated locations” under his plan, which has been rejected by Dublin and Brussels.

Mr Carson rejected the idea that there could be customs posts at or near the Border again without there being a police or military presence to protect them against republicans, who would view them as symbols of partition.

“You can’t enforce civil law in an area where the military and the police can’t go. That was the sort of schizoid situation we were in,” he said, recalling the years of enforcing customs rules in the Border region.

Retired customs official Conor McConville said that “democratically speaking and practically speaking” it was a “non-runner” to have a customs border in Northern Ireland.

Mr McConville believes that the DUP, which supports Mr Johnson’s plan, holds a minority view on this issue in Northern Ireland. He said that from a practical point of view it was not possible to manage customs checks given the volume of traffic crossing the Border.

“Customs operate on the basis of facts. If someone is exporting 25 tonnes of something, you want to know is it what they say it is and what is its position when it gets to its destination,” he said.

“The idea of having permanent customs stations on the Border the way it was years ago is a non-runner. It would take an army to staff these places because of the traffic. Financially it would be a crazy thing to do. If you take that into account, assuming there was going to be a customs border, how could that be done?”

The customs veteran believes that the proposal ignores the 1998 Belfast Agreement, which he describes as a legally binding international treaty that protects an open border in perpetuity.

Another retired customs official, who was also injured in the 1972 bombing and did not want to be named, said Mr Johnson’s plans showed a “severe lack of understanding” in a scenario where the UK imposes a customs border but then ignores it.

“It is a nonsense. If you are going to have an economic border with different prices and different duties, you will open it up to smuggling more openly and giving them a nod to go ahead,” he said.

“It is not practical that they are going to have an open border but checks and controls at large businesses. From a revenue point of view, it is going to be happy days for smugglers.”

Mr Carson said he could not see any circumstances where there could be a return of a hard border.

“I can’t see that anybody really wants it. It really is a breath of fresh air to be able to drive where you like and when you like,” he said.