Daily briefings are causing unnecessary anxiety and should be switched to a weekly basis, number of doctors argue 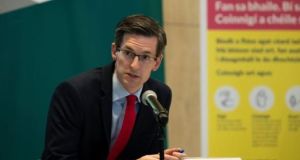 A number of doctors have called for an end to the daily Covid-19 figures, describing them as a “self-perpetuating cycle of misery”.

He recommended the daily briefing be changed to a comprehensive weekly one.

“We need to move to a system whereby we have a comprehensive weekly briefing identifying the weekly trend in the virus which is far more important,” Mr Kelly added.

“People are being bombarded with a lot of information at the moment and this is one way of ensuring that they do not become overwhelmed and stop listening to public health advice.”

However, Tanaiste Leo Varadkar said the National Protection Surveillance Centre (NPSC) should continue to publish case numbers every day in the interests of transparency.

However, he urged the public not to “obsess about the number of cases every day”.

Mr Varadkar said the majority of people who are testing positive for Covid-19 now are asymptomatic. Their infections would not have been picked up in February or March when only those with symptoms were being tested.

“What we are seeing is that the second wave of cases is very different in that it is resulting in an increase in hospitalisations, but nothing on the scale of what we saw back in the spring.

“Even in countries like France and Spain where they are seeing record numbers of cases every day, higher even than in the spring, it is resulting in an increase in hospitalisations and deaths but a fraction of what it was.

“That gives me some confidence that we used the period during lockdown well to get PPP for staff and to shield vulnerable groups like nursing homes for example and to educate the public.”

Dr O Tuathail said Covid-19 is likely to be around for two to four years so this issue will be dealt with for the long term.

The release of daily figures is leading to people becoming “obsessed” with the figures to the detriment of the rest of their lives.

“We are running the risk that we will overwhelm people so much that they just don’t care anymore. We are going to have to live with this so we have to stop letting it take over our lives in its entirety,” he said.

“Moving from a daily to a weekly announcement would help with people’s anxiety. People know that Covid is around. They know that cases are climbing. My phone lights up every single day at 6pm. That causes anxiety.”

Dr O’Tuathail tweeted his support for Ciara Kelly, the presenter of Newstalk’s Breakfast Show, when she said it was time for a fresh look at how Covid-19 figures are presented.

Dr Kelly, who is a medical doctor and has had Covid-19, said the virus has to be viewed in the context there was just four deaths from it in August. More people had died from suicide, in traffic crashes and from various diseases that had gone unreported, she said.

“We are getting this wrong. We are frightening people, and the narrative around Covid-19 needs to move on. We need to look at how we are reporting Covid. There isn’t a justification for it [the current reporting].”

Dr Gabrielle Colleran, the vice-president of the Irish Hospital Consultants Association (IHCA), also called for the daily Covid-19 announcement to be dropped.

Speaking in a personal capacity, she said the daily numbers are “anxiety-provoking for people”, especially when some days have a lot more numbers than other days.

“People get this brush of fear. What matters is looking at the matter over time. How is this Monday compared to the Monday before?

“I think it would be much better for us to be getting the data on a weekly basis, and it might just bring some of the anxiety about it down,” Dr Colleran said.

“Personally I think not getting daily numbers would be a good thing. NPHET [the National Public Health Emergency Team] will be making their recommendations about what we should do based on the overall trends and not on one single day.”

She said daily figures are a distraction and the focus should be on keeping community transmission down.