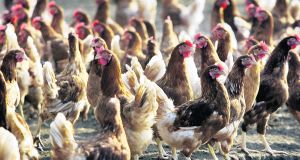 The Department of Agriculture has urged all poultry farmers to be ‘vigilant’ during the current high risk period for bird flu. Photograph: Yves Logghe/AP

Poultry farmers have been warned to watch for bird flu among their flocks after a suspected case of the avian disease was discovered in a Co Fermanagh chicken farm in recent days.

The Department of Agriculture has urged all poultry farmers to be “vigilant” during the current high risk period for bird flu. Authorities are investigating a case of suspected avian disease in a broiler breeder flock in Co Fermanagh.

Poultry farmers, including people who kept small chicken flocks in their back gardens, are advised to minimise any contact their flock has with wild birds to prevent them from potentially contracting bird flu.

“It is critically important to ensure that wild birds do not have access to feeding areas and feed stores,” a department spokesman said.

“Flock-owners should also regularly monitor their birds for signs of disease. If they suspect any signs of the disease in their flocks, they must report it immediately to the Department of Agriculture, Food and the Marine,” the spokesman said.

Bird flu can affect humans if they come into close contact with infected poultry, and the disease is primarily spread by wild birds.

Ireland is currently in a high risk period for bird flu due to migration patterns bringing wild birds to the country in large numbers since October. The disease is often spread when these birds mix with Irish wild birds in wetland areas, and from those birds can then be passed onto poultry flocks.