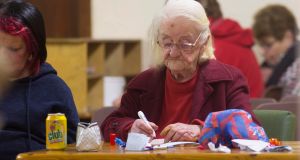 Bingo caller Oliver McCabe got a huge cheer when he announced that Mai Keaveney, sitting at the back of the hall, was celebrating her 54th wedding anniversary with her husband Johnny. Fifty or so heads swivelled in the direction of Keaveney, nodding their congratulations, some whooping with delight .

But there was an even bigger cheer in St Ronan’s Hall, Keadue, Co Roscommon a few minutes later when McCabe, a butcher in the village, announced the Government was “backing down” and there was no threat to bingo.

It may now be gospel that there was never going to be any threat to sessions like the one in Keadue, where the prize pot is in the hundreds rather than thousands of euro. The raffle money is collected in a biscuit tin and many of the patrons will tell you they go to as many as five bingo sessions a week to get out of the house. However, many regulars were fearful for a few days that their social network was about to be broken up.

The Government’s plan to impose a bingo prize money cap of 50 per cent of proceeds was amended to 75 per cent this week, following interventions from Leitrim TD Martin Kenny and Roscommon-based deputy Denis Naughten.

McCabe says the episode shows how “the people at the top” are out of touch. “Many of them never stood in a bingo hall,” he adds.

Meanwhile, Rose Deane, Anne Gray and Peggy Whitney meet up a few times a week at bingo sessions in places like Keadue and Drumboylan, Co Roscommon, and Drumshanbo and Carrick-on-Shannon in Co Leitrim. They believe that 60 per cent of regulars at these venues are people who live alone. “It’s a place you don’t mind coming to on your own,” Gray from Leitrim village points out.

“It’s better than sitting looking at the four walls. And it’s for two hours so when people get home the night is a lot shorter,” Deane says.

Tommy Joe Flaherty (85) from Riverstown, Co Sligo was in his usual spot at the back of the hall in Keadue where he comes every Wednesday night with his sisters Eileen (91) and Margaret (“a lot younger”) .

“It’s a night out,” says Flaherty who brings his sisters to bingo five nights across three counties in Drumshanbo (Leitrim); Keadue, Drumboylan, and Boyle, Co Roscommon, as well as Collooney, Co Sligo. “They’d go seven nights if they could,” he says. “It’s not about the money,” he adds, without lifting his head from his card as the numbers are called.

Keadue is a small game but Flaherty says they like to support it and have been coming since it started.

How long ago was that? “Must be 20 years,” he guesses. “Forty,” corrects caller McCabe.

He has the heat on and the hall cosy long before the patrons arrive, many of them well stocked with sweets and crisps, like giddy children on a school outing. Some slip out of the hall for a smoke during the breaks.

Mary Moran from Keshcarrigan, Co Leitrim and Eileen O’Brien from Gowel, Co Leitrim say they get all the news from McCabe every Wednesday night as he punctuates the games with news of who has got engaged or who passed on in neighbouring parishes. The women are part of a small group of “bingo friends” who have become so close they go away for weekends together.

“We have made friends all over the place,” said O’Brien who, like Moran, plays five nights a week.

“If they cut the amount we pay out we’d close, simple as that,” says McCabe. “I had to share a tenner between two just now. Can you imagine giving them €2.50 each?”

John Comiskey, retired from IT Sligo, volunteers at the weekly bingo sessions in Gillooly Hall, Sligo where about 120 people aged from 18 to 80 gather on Sunday nights.

“They come for the banter, although we have had to get more politically correct and we can’t say things like ‘two fat ladies’ any more,” says Comiskey.

Prize money is usually €30 for a line and €60 for a full house, he says. “I genuinely don’t think the Government ever meant to target bingo but to think our legislators even considered what they did without realising the consequences for so many people makes you wonder what they are at.”

He says it’s puzzling, given how much the Government talks about social isolation.

Tea and Kit Kats are the favoured refreshments of patrons in venues like Gillooly Hall, built in 1895 as a temperance hall.One caller said:“Don’t say where I volunteer but I see a lot of people who come to bingo because they are trying to escape other addictions like alcohol.”