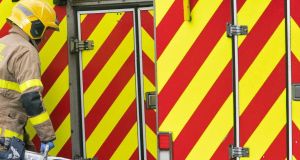 Ireland has two types of firefighters – those employed full time, and the retained fire service that is called out in emergencies. File photograph: Colin Keegan/Collins

Members of the National Retained Firefighters Association are looking to a case in Belgium as some 400 individual officers take cases against the State’s local authorities who employ them.

Ireland has two types of firefighters – those employed full time in larger urban areas such as the main cities, and the retained fire service that is called out in emergencies by local authorities.

Retained firefighters, who account for over 65 per cent of the country’s fire service, are on call 24 hours a day, 365 days a year. While some terms vary from station to station, retained firefighters are generally required to live and work within a five-kilometre radius of their stations.

The “retainer” paid to a new fire officer is €7,895 for the first two years of service, rising in increments to €10,812 per year, after ten years’ service.

“If your station has around 50 call-outs per year you can not survive on it,” said Mick Farrell, a member of the association based in Ballymahon, Co Longford.

Firefighters’ hopes of better pay and terms were boosted last year when the European Court of Justice (ECJ) ruled a part-time Belgian fireman could claim payment for time when he was “on call” – that is available for work when there was no fire or emergency to attend.

Rudy Matzak - a volunteer firefighter in Nivelles - was allowed to stay at home when on call, but he has to be ready for work with only eight minutes’ notice.

The ECJ argued this qualifies as work due to the time con straints. It was noted the ruling could allow other workers across the EU to charge for this kind of shift.

However, in a judgment earlier this year the Workplace Relations Commission (WRC) said fire officers’ assertions they worked up to 168 hours a week of “stand-by” were “absurd”.

A WRC adjudicator said “for the complainant to say they work 24 hours a day, seven days a week and 52 weeks of the year is absurd”.

Mr Farrell and others in the National Retained Firefighters Association say their lives are full of cancelled appearances at birthday parties, weddings and other family events. Firefighters have complained they cannot take their young children to the cinema, for fear that they would have to leave them to answer an emergency call out.

Stephen Mc Fadden, chairman of the association, said the Belgian case had “massive, massive implications” for retained services here and across Europe. He said the Belgian firefighter “was only on call one week in every four, whereas the firefighter in Ireland was on call 48 weeks of the year. On call 24/7.”

On Saturday solicitors will provide an update on the progress of about five cases from the 400 that are pending. “We will have a report from the solicitors who will be present on the day to give up to date information on the ongoing cases with regard the Working Time Act”, he said.

The National Retained Firefighters Association holds its AGM in Mullingar on Saturday.