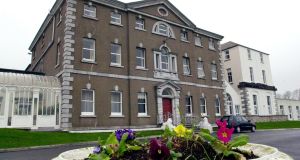 The Bessborough centre in Cork. “The developers must remain conscious of the apprehensions and sensitivities of many survivors of the mother and baby home at Bessborough”

Developers seeking to build an apartment complex on the grounds of the former Bessborough home should retain forensic archeologists during any excavation in case any infant remains are found, a consultant has advised.

Conservation expert John Cronin prepared a report for developers MWB Two Ltd as part of the company’s application for planning permission for a total of 246 residential units on a 3.7-acre site in the former Bessborough demesne in Cork.

As part of its planning application for Gateway View, MWB Ltd retained Mr Cronin, who previously co-ordinated geophysical surveys and archaeological investigations at the Good Shepherd Convent in Sunday’s Well.

In his report Mr Cronin acknowledged the Commission of Investigation into Mother and Baby Homes had found in its interim report published in 2019 that over 900 babies linked to Bessborough had died between 1922 and 1998.

And he further noted that the commission had only been able to identify burial places for just 64 infants, leaving over 800 infants associated with Bessborough without any known or recorded place of burial.

He noted that the commission was unable to find any documentary evidence among the records provided by the Congregation of the Sacred Hearts of Jesus and Mary, who ran Bessborough, as to where these infants were buried

“However as no physical evidence of possible locations was found the commission did not consider it feasible to excavate 60 acres (still owned by the congregation), not to mention the rest of the former 200-acre estate,” he said.

Mr Cronin, who inspected the site and reviewed the results of on-site archaeological investigations, said it partially surrounds a folly and a small graveyard.

He found that the lands appeared to have been heavily disturbed as a result of construction of a roadway and a public sewer network in the mid-2000s, which made it unsuitable for geophysical survey.

In December 2019, a programme of archaeological investigation was carried out under licence from the National Monuments Service by a team of three archaeologists, including a human bone specialist.

Six of eight intended test trenches were excavated before the licence was withdrawn, and while these digs revealed the area was heavily disturbed no bones or anything of osteological interest was identified at the location.

A campaign group, the Cork Survivors and Supporters Alliance, claimed in a submission to the planning authorities that a much larger children’s burial ground surrounded the folly and the cemetery where some 25 nuns are buried.

However, Mr Cronin said the results of the archaeological investigations on the site did not support the alliance ’s assertion.

However, he acknowledged that while the potential that unrecorded burials took place within the site was remote, it could not be discounted entirely, particularly given the large number of infants who died in Bessborough.

“The developers must remain conscious of the apprehensions and sensitivities of many survivors of the mother and baby home at Bessborough,” said Mr Cronin.

He said the developers should also support any commemorative measures that Cork City Council or other civic bodies deem appropriate to ensuring the legacy of the mother and baby system is remembered.

And he said the developers should welcome the planning authorities making it a condition of any planning permission that they would retain experts, including a qualified osteoarchaeologist, to monitor the development works.