Further 23 deaths and 1,378 new cases of Covid-19 reported in Republic on Sunday 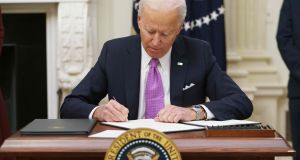 The US will also ban entry to most non-US citizens who have recently been in South Africa in response to the new Covid-19 strain there. File photograph: Mandel Ngan/AFP via Getty

The administration of US president Joe Biden is to continue restrictions on travel to the US from Ireland, the UK, Brazil and 26 countries in Europe that the Trump administration planned to relax as of Monday, said a White House official.

The US will also ban entry to most non-US citizens who have recently been in South Africa in response to the new Covid-19 strain there, according to the official familiar with the plan who requested anonymity because the plans haven’t been made public.

It’s unclear how long the restrictions will continue.

This is consistent with comments from White House press secretary Jen Psaki, who tweeted on January 18th that “this is not the time to be lifting restrictions on international travel.”

The US is warily viewing new coronavirus strains that have originated in South Africa and Brazil, as well as one recently identified in the UK.

Reuters first reported the US plan to ban travel from South Africa for most non-US citizens, citing officials with the Centers for Disease Control and Prevention.

Earlier on Sunday, a further 23 deaths of Covid-19 patients were reported by the National Public Health Emergency Team (Nphet).

It brings to 2,970 the total number of deaths in the pandemic. Nphet also reported 1,378 further cases of the disease, bringing to 187,554 the total recorded to date.

Chief Medical Officer Dr Tony Holohan, said that while Ireland is “starting to make progress” in reducing the level of the virus in the community “this is a critical time for all of us to hold firm to the public health advice.

“We must not let down our guard against this highly infectious disease and the risk it poses to ourselves and those most medically vulnerable to infection,” he added in a statement.

“There is a huge volume of disease in the country and the recent surge in cases continues to place an unprecedented strain on ICUs, hospitals and other frontline healthcare services. The answer lies in driving down social contacts and congregation in all settings, including in workplaces.

“Everyone who can, should work from home where possible. For those of us who cannot work from home, it is essential to follow the public health advice in the workplace, such as the wearing of face coverings when moving around communal areas. We urge all employers to facilitate home working as much as possible and to ensure strict adherence to public health measures in the workplace.”

Also on Sunday, the head of the HSE Paul Reid said there is a “significant pipeline” of patients who may need intensive care facilities and that this is presenting a “real challenge” for the hospital system.

Mr Reid said that on Sunday there were 24 intensive care beds free across the State. There were 1,914 patients in hospital with Covid-19, including 218 in intensive care units.

Mr Reid said that eight hospitals had reached the level of their surge capacity for patients needing intensive care and that some had to be moved in recent days to other hospitals.

Speaking on the This Week programme on RTÉ Radio One he said that having spoken to consultants in this area there had been significant differences in recent weeks in terms of “delayed exits “ of patients from intensive care units and increased mortality.

Chief Medical Officer Dr Tony Holohan said on Saturday night Ireland was beginning to flatten the curve again “through the solidarity shown by families and communities across the country”. The National Public Health Emergency Team (Nphet) announced a further 77 deaths of Covid-19 patients and reported 1,910 further cases of the disease, bringing to 186,184 the total recorded cases to date and the total number of deaths in the pandemic to 2,947.

Saturday is the first time the case number figure has dipped below 2,000 since January 1st even though the number of deaths from the disease remains high and hospitals in the Republic remain under severe pressure.

But Mr Reid tweeted on Sunday morning that it was “battling to hold the levels of care that we value & to save lives”. He said 650 Covid-19 patients were receiving some level of critical care, with 214 in ICU and 436 on advanced respiratory support. “It’s not an Emergency Dept crisis now but it’s probably more critical than that,” he added. There were 1,893 people in hospital with coronavirus at 8pm on Saturday.

Taoiseach Micheál Martin said on Saturday Ireland faces Covid-19 restrictions for the first six months of the year and noted a problem with the supply of AstraZeneca vaccine would delay the rollout to the over-70s. He also said schools would not be fully open to all students before St Patrick’s day and confirmed the Cabinet would be considering restrictions to foreign travel when it meets this week.

The HSE chief executive said on Sunday that higher grade FFP2 masks were being provided to more staff in hospitals as had been sought over the weekend by the Irish Nurses and Midwives Organisation.

He said the draw down of these masks had increased from 130,000 per week to 1.3 million per week.

Mr Reid also said that the HSE would be putting in place from January 27th greater testing of staff in hospitals using a supply of 500,000 antigen tests which it had received.

He said the HSE was anxious to see a resumption of testing of close contacts of Covid-19 cases which was suspended a number of weeks ago as a result of the major spike in the numbers involved. However he said it would need to see the number of cases fall below 2,000 on a sustained basis for a number of days for this to take place.

Mr Reid also said that by the end of Sunday residents and staff in all nursing nursing homes would have received the first dose of the Covid-19 vaccine with the exception of a very small number due to outbreaks.

Mr Reid said the plan to commence the vaccination of people aged over 70 in the community would continue from mid February, despite the announcement from AstraZeneca on Friday that there would be delays in the provision of supplies. “We are not quite sure of the amounts just yet in terms of how long it will take to complete that (process).” – Additional reporting Bloomberg