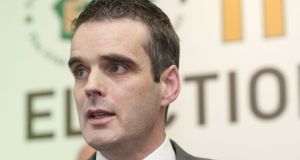 IFA president Joe Healy says the supermarket chains are the “kingmakers” and are “on top of the pile, dictating price”. File photograph

Groups representing livestock farmers are meeting today with some of the largest retailers in the State in an effort to secure a price increase for beef.

This meeting between the beef taskforce and retailers is the first time since the beef crisis began that the biggest supermarket chains in the country will sit across a table from farming groups. It is currently under way in the Department of Agriculture, with representatives from Tesco, Dunnes, Supervalu, Lidl and Aldi in attendance.

Speaking on his way into the meeting this morning, Irish Farmers’ Association president Joe Healy said the supermarket chains are the “kingmakers” and are “on top of the pile, dictating price”.

“The key thing is the retailers are here,” he said, warning of “unsustainable discounting” in the sector. “There’s no point in a race to the bottom,” he said. “It is important to see what sort of an attitude they bring to the table,” Mr Healy said, adding that it would have to be a better attitude than that shown by processors in previous talks.

An agenda circulated to attendees in advance of the meeting shows that the discussion with retailers is scheduled to run to around lunchtime, followed by updates from Teagasc and a further market update report.

Pat McCormack, president of the Irish Creamery Milk Suppliers Association (ICMSA) said he would be calling on the retailers to explain the margins they were obtaining on Irish beef they were selling, especially when compared to other markets in Europe. “We need to see that gap closed, not narrowed, but closed,” he said.

Elsewhere, a progress update sent to attendees shows that consultancy firm Grant Thornton has been awarded a tender to carry out an independent review of market and consumer requirements, especially whether there is a strong relationship between consumer demands and bonus criteria paid out for cattle of a certain age by the processing industry. Beef farmers believe there is no evidence to support the payment of a bonus for younger cattle, which de facto lowers the price that can be achieved for older animals which don’t qualify for the bonus.

Grant Thornton will also conduct detailed analysis of the price achieved for Irish cattle, as well as competition law issues relevant to the beef sector.