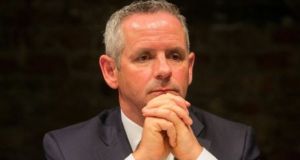 The chief executive of the Health Service Executive has said he would like to see fewer emergency departments around Ireland.

Paul Reid said it would be a policy decision for Government but he believes numbers need to be “really assessed.”

Mr Reid was speaking on Thursday towards the worst ever week of overcrowding in the Irish hospital system. There were 520 patients waiting for admission to hospital on Thursday morning, according to the Irish Nurses and Midwives Organisation (INMO).

This is 4 per cent up on the same day last year but down from the record high of 760 set last Monday and Tuesday.

“This is still a dangerous number of patients without beds, but any progress is welcome,” said INMO General Secretary Phil Ní Sheaghdha. “We must keep a laser focus on driving this figure down in the coming days. The only acceptable figure for patients without beds is zero.”

Because of the overcrowding, large sections of hospitals have effectively shut down and some emergency departments can no longer accommodate trolleys, the Irish Hospital Consultants Association (IHCA) has claimed. As a result, patient safety was being compromised.

But Mr Reid, speaking on Newstalk, said progress was being made in reducing the number of people on trolleys in hospitals.

The health system traditionally sees intense pressure on services at the start of the year during the winter flu season.

Health officials have directed that elective surgeries be cancelled, and Minister for Health Simon Harris has promised extra hospital beds in an attempt to ease the strain on emergency departments.

Mr Reid said there was a need to strengthen community care to provide some relief to hospitals.

“If we keep doing everything the same as we’ve been doing it, we’ll continue to have the same answer and have an overcrowding issue.”

He called for three measures to be implemented. “The first one I’d call improving the capacity that we have in the system - the number of beds and resources to support those beds.

“We need about 2,500 beds in the hospital system over a period of years.

“We also need to resource up and strengthen our capacity in the community side to give relief on to the acute hospital system.

“That’s a major part of our national service plan next year.

“More GPs, more diagnostics in our primary care centres, more capacity and capability of pharmacies to look at minor injuries, etc. There’s a way of changing the route into the acute system.”

The second element is changing the way that the HSE organises its work between the acute system and the community system, he added.

“The third one is we do really need to look at the number of emergency departments that we’re managing all across the system.

“So we’re currently managing 29 emergency departments, and that’s the route where primarily people go when they need it.

“There’s a lot we need to do with our current emergency departments, but it has to be part of an assessment we do.

“Just to give a simple example, in a national trauma strategy where we’re looking at people who would be treated in major traumas. That does have a vision of having a small number of dedicated, major trauma centres across the country with a number of spines and hubs through the country off that,” he said.