Ban on evictions and rent freeze in new emergency legislation 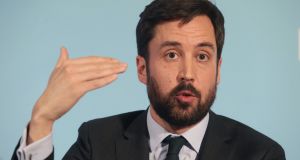 The new emergency legislation published on Tuesday night contains measures to prevent evictions and implement a rent freeze for the duration of the coronavirus crisis.

The measures, announced last week, are among a swathe of emergency moves contained in the Emergency Measures in the Public Interest (Covid-19) Bill 2020, which is expected to pass the Dáil and Seanad by the end of the week.

The Bill was approved by the Cabinet on Tuesday. Under a section on how the existing Residential Tenancies Act operates will be changed, it says that the emergency period will be for three months from the legislation taking effect. The moves are supported by all parties and groups in the Dáil.

This period, however, may be extended by the Government if deemed necessary. The Bill says a “landlord shall not serve a notice of termination in relation to the tenancy of a dwelling during the emergency period”.

Nothing off limits in Varadkar plan to stem coronavirus VIEW NOW

The tenant will also be encouraged to get rent supplement from the State if paying rent becomes a problem.

Other measures proposed by Minister for Housing Eoghan Murphy and approved by the Cabinet were the abolition of the requirement for planning permission for the construction of emergency health facilities, such as hospitals; the removal of the requirement of a change of planning permission for a restaurant to do takeaways, and the pausing of various statutory periods in the planning process. This would be similar to the Christmas period when a pause is placed on planning periods due to public offices being closed.

“The measures we are proposing remove planning barriers for temporary medical facilities, allow hard-hit restaurants adapt, protect the supply chain, and preserve the integrity of decision-making and public participation in the planning process,” Mr Murphy said. “We will keep the situation under constant review as this crisis evolves and respond to any emerging issues in the coming weeks and months.”

Another change being made will allow retailers receive deliveries and stock their stores from lorries and other vehicles throughout the day and not just at designated times. Local authorities have told Mr Murphy they will not enforce existing rules “given the compelling reasons in the public interest to support the delivery of food and essential supplies at this time”.

A Government statement said: “These conditions were designed with normal ‘business as usual’ circumstances in mind and, in the context of the current emergency, cannot be allowed to act as a barrier to the effective operation of supply chains.”