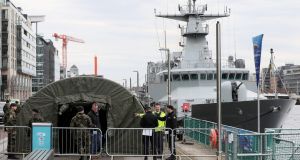 Members of the Defence Forces set up tents on Sir John Rogerson’s Quay in Dublin alongside the LÉ Samuel Beckett as a coronavirus testing centre in recent days. Photograph: Brian Lawless/PA Wire

The Defence Forces has received a significant number of offers from retired personnel to rejoin in order to help with the coronavirus crisis.

On Tuesday Taoiseach Leo Varadkar said emergency legislation would be tabled to allow retired Defence Forces personnel, including both officers and enlisted ranks, to rejoin the organisation.

The Defence Forces has been mobilised across the country to aid the HSE in combating the spread of the virus, also known as Covid-19. This includes the transformation of naval ships into support hubs for testing centres and the tasking of soldiers in the delivery of vital supplies.

Even before Mr Varadkar’s announcement, the Defence Forces has received numerous enquiries about former member rejoining, according to military sources.

The Dáil is to vote on a version of the Defence Force (Amendment) Bill which was introduced in the last Dáil to allow the re-enlistment of “suitably-qualified” retired personnel.

Last year the Department of Defence ran a much smaller re-enlistment programme targeted at former Air Corps pilots who had departed for the private sector. It led to a handful of former officers rejoining.