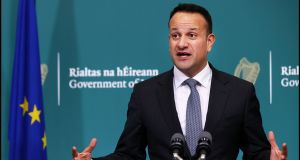 Taoiseach Leo Varadkar has asked people to “stay home if at all possible” as he announced new restrictions to help the country tackle the spread of coronavirus.

Under the new measures, which support those already outlined by the Taoiseach earlier this month, outdoor gatherings should be restricted to four people, and can only be greater if they involve the same household.

Meanwhile, he outlined €3.7 billion worth of increased welfare payments and income supports to help those who have lost, or will lose, their jobs. Yet this money will cover the bill just for the next three months alone.

Covid-19 welfare payment to those already laid off because of the crisis will increase from €205 to €350, while a new income-support scheme for those who can be kept on a company’s books will see 70 per cent of a person’s salary covered by the State up to a maximum value of a €38,000 or €410 per week in take-home pay

The cost will be “great”, he said. “But we can bear it, and we will be able to pay it back as a nation. We do so willingly because it is the right thing to do, and because we owe it to our fellow citizens.”

The Cabinet had been told, as it signed off on the measures on Tuesday, that the increased welfare payments and income support schemes would cost €300 million per week for 12 weeks.

The income subsidy will maintain the link between employees and employers and “will make it easier for us to bounce back when this is all over”. The self-employed will be covered too.

Minister for Social Protection Regina Doherty told a Government Buildings press conference that an estimate she made last week that 400,000 people would lose their jobs was “conservative”.

Instead a Cabinet memorandum warned that 500,000 jobs could be lost, but the Government intends that a large portion of these workers will qualify for the income and welfare supports.

An agreement has been reached with private hospitals which will see them effectively operate as public hospitals for the duration of the crisis, though some details remain to be resolved.

The deal added “over 2,000 beds, nine laboratories, critical care capacity and thousands of staff to our health service” that would be needed in the weeks and months ahead, said the Taoiseach.

The order to close schools and crèches will now apply until April 19th.

Rejecting the term “lockdown”, Mr Varadkar said the word means “very different things to different people and in different countries, and therefore can cause confusion. We need clarity rather than confusion.”

However, hotels are reserved for “essential non-social and non-tourist” customers; cafes and restaurants can open as take-aways only. “Non-essential” shops must close. Those that stay open must obey physical distancing rules.

All sporting events, including those behind closed doors, will be cancelled, including horse-racing. Playgrounds and caravan parks will close, and places of worship should “restrict numbers”.

Planned indoor and outdoor events will not take place. Factories and construction sites can stay open, but only if the distancing rules are enforced..

Gardaí and park rangers will enforce the rules in parks and elsewhere.

Gardaí will also “increase interventions” in venues where such distancing is not being followed.

Those who live with someone who has a suspected case of Covid-19 and is awaiting a test or a test result should “restrict movements until the test is reported negative, or for 14 days since the onset of symptoms, whichever is shorter”.