Rapid rise recorded in temperature of the sea and river Shannon 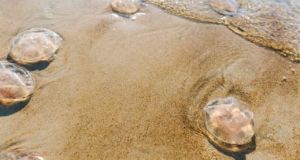 Irish Water Safety says it is not changing its protocols for lifeguards on treating jellyfish and weever fish stings. Photograph: Getty Images

Unusually high temperatures this past week on land are being matched on water, with Caribbean conditions off beaches and in shallow bays.

Irish Water Safety (IWS) chief executive John Leech says swimmers may experience temperatures of 20 to 24 degrees Celsius and more, but records cannot be confirmed until September when the seas are at their warmest.

He said temperatures in the river Shannon were over 24 degrees late this week, while there were recordings of 17 degrees on the Atlantic seaboard and 15 degrees in the Irish Sea.

However, the combination of balmy conditions and spring tides associated with the full moon may also result in increased risk of jellyfish and weever fish stings, with Lion’s mane jellyfish proving the most venomous of our indigenous species.

Four swimmers have received hospital treatment in Galway recently due to Lion’s Mane, which are larger than normal and more geographically spread this year, according to University College Cork zoology lecturer Dr Tom Doyle.

IWS says it is not changing its protocols for lifeguards on treating jellyfish and weever fish stings in spite of research published last year which stated that vinegar and immersion in hot water or treatment with hot packs is more effective than seawater and cold packs.

IWS advises that the skin area should be rinsed copiously with sea water, and says fresh water, vinegar and alcohol should not be used.

An ice pack or dry cold pack should be placed on the skin area, while hot water immersion for about 20 minutes in 45 degrees Celsius should be used for Portuguese man o’war stings.

Meanwhile, Ireland’s heatwave appears to have reached its peak with temperatures on Friday dropping below the mark of 32 degrees recorded a day earlier.

However, forecasters believe more sweltering weather is on the way in a summer now being widely compared to the searing heat of 1976.

The highest temperature on Friday, 31.1 degrees, was recorded at Shannon at 4pm, around a degree below where thermometers there peaked on Thursday.