Ryanair vows to ‘face down’ strike by Dublin-based pilots

Fórsa describes airline memo as unhelpful, and insists it has mandate for strike action 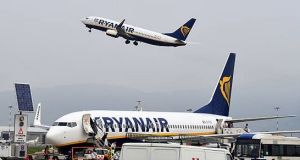 Ryanair made no moves over the weekend to allay the concerns of thousands of its passengers who fear they will be caught up in Thursday’s one-day strike by a significant number of its Dublin-based pilots.

It now seems likely the dispute will go ahead, with the company conceding as much in an a memo sent to staff late last week in which it described the planned strike as “blackmail” and vowed to “face down” rebel pilots.

In response to queries from The Irish Times on Sunday evening, a spokesman said the airline’s position was “the same as the update on Friday evening” when it issued a stern rebuke to just under 100 of its pilots who are scheduled to strike.

The airline has not shifted from its view that the work stoppage called by the Irish Airline Pilots Association (Ialpa) and the broader Fórsa union has no mandate.

Ryanair has not given any indication that a face-to-face meeting between management and union officials will take place before the airline has to communicate with impacted passengers on Tuesday afternoon outlining its plans for dealing with the work stoppage.

In a memo sent to staff last Thursday it conceded that it was “likely some disruption will occur next Thursday” and it described the threatened strike as “blackmail”, adding that it would “face down” the industrial action on the basis that it “has no democratic mandate whatsoever”.

Fórsa described the language in the memo Ryanair circulated as unhelpful, and it continues to insist it does have a mandate for strike action despite the fact that less than a third of Ryanair’s Dublin-based pilots have voted in favour of the stoppage.

The union argues it has a mandate on the basis that it was only in a position to ballot pilots directly employed by the airline and not contract employees.

The airline has yet to outline how it plans to “face down” the strike which will involve 94 of its 350 pilots operating out of its Dublin base. However, it is likely to seek to draft in non-unionised and contract pilots from other bases into Dublin to put on as wide a service as possible on the day of the dispute.

Non-unionised pilots will be expected to cross the picket lines and fly as normal, and it may also be possible to fly people to destinations further afield via hubs including Stansted.