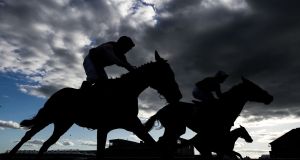 Horse Racing Ireland (HRI) has said traceability systems introduced this year will help improve the monitoring of thoroughbreds in this country.

However, Brian Kavanagh, the chief executive of racing’s ruling body, said that, ultimately, the responsibility for animals lies with their owners.

Mr Kavanagh was commenting after The Irish Times reported how a thoroughbred horse previously bought for £240,000 was found abandoned and emaciated in a Cork barn.

War Celeste, a seven-year-old mare, was abandoned along with 10 other horses and several cats and dogs. A number of the animals had to be put down due to the poor condition in which they were found.

War Celeste has since been nursed back to health by animal charity My Lovely Horse Rescue, whose volunteers discovered the animals last year.

The horse has past links to the stud farm of composer Andrew Lloyd Webber, Watership Down Stud, where she underwent sales preparation for auction in 2013. The horse was bought for £240,000 by China Horse Club and put into training in Ireland with Co Tipperary trainer David Wachman, but never raced. She was later sold on for £15,000 by the Chinese racing club.

A spokeswoman for Watership Down Stud said the abandonment of War Celeste was a “terribly sad story”, but she added she was “so pleased she’s being looked after now”.

Mr Kavanagh said such cases were not what anyone wanted to see but stressed they did not fall under HRI’s remit.

“The various animal welfare Acts are obviously policed by the guards [but] there is a local authority function in regard to neglected horses in that particular region,” he said.

“The owners have the responsibility for the animals, the same way as owning a dog. The responsibility rests with the owners. We [HRI] have a duty to inform and educate and advise on best practice,” he added.

HRI’s industry-wide policy on prohibited substances and doping control has been introduced this year with provision for greater tracing of horses throughout their lives in both racing and breeding.

Meanwhile, the veterinary adviser of the Irish Thoroughbred Breeders Association has said the abandonment of thoroughbred horses was “very much a rarity”, due to improved traceability back to owners.

Des Leadon, who has published research on the abandonment of horses, said the industry had improved over the past decade.

There were now stricter requirements around horses being microchipped, and holding up-to-date passports, improving accountability to owners, he said.

Improvements in the registration of horses meant “events like this are less frequent”, Mr Leadon said. “There are some gaps in the system, but not many.”

One potential “Achilles heel” of the current registration system was that, after purchasing a horse, the buyer may neglect to register their ownership. This meant the previous owner, who “may have sold it on in good faith”, was still the last registered owner, he said.

Often in cases where horses were abandoned, or left without adequate care, the owner had fallen into financial difficulties, Mr Leadon said.

The lack of requirements on owners to notify authorities when horses were moved between locations was a key flaw in the current tracing system, according to one Department of Agriculture source working in the area.

Cattle owners were required to inform the department of any movement of animals between premises, logging the transfer of each animal, but there was no such requirement on the equine industry, the source said.

During the economic downturn there was a spike in the number of horses being abandoned or neglected across the country, with the number of cases declining in recent years.

A 2012 study that looked at the rise in unwanted horses following the recession found that out of a sample 227 callouts horse welfare charities responded to between 2005 and 2010, 21 per cent related to thoroughbreds. Some 38 per cent of callouts related to abandoned ponies and the remainder to sport horses.