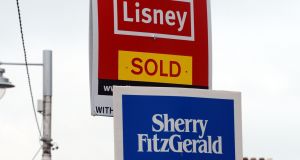 The most recent Daft.ie rent survey which shows rents have reached all-time high, averaging €1,366 per month nationally and more than €2,000 a month in Dublin. Photograph: Cyril Byrne/The Irish Times.

Struggling renters have been “abandoned” by a Government whose housing policies “have failed” and which “continues to pretend the market can solve” the housing crisis, charities and Opposition politicians have said.

They were reacting to reports on the most recent Daft.ie rent survey which shows rents have reached all-time high, averaging €1,366 per month nationally and more than €2,000 a month in Dublin.

The highest rents in the first quarter of this year were in south Dublin city - €2,131 a month. This is 7 per cent higher than at the same time last year. The lowest rents in Dublin now are in the north county area, where they have increased 6.9 per cent in a year to €1,671 per year. The biggest increase nationally was 16.6 per cent in Co Galway to €906 per month.

Catherine Murphy TD, co-leader of the Social Democrats, said the Government was “pretending” it could solve the “escalating problem”. She said housing costs were “the single biggest driver of the high cost of living for people”.

“It is crystal clear a whole generation of renters have effectively been abandoned to the private rental sector,” she said. “Rent pressure zones have failed and many in rental accommodation are struggling to keep roofs over their heads while living in daily fear of sudden rent hikes or eviction notices.”

John-Mark McCafferty, chief executive of housing charity Threshold, said the root of the high rents was the dearth of social housing building.

“Even where it is being supplied it is mostly three and four bedroom units which does little to address the needs of single people who are particularly at risk of homelessness.”

He called on Government to “re-examine” tax incentives for institutional investors given these currently cater for high-income renters. The Government must, he said, make it more attractive for to develop for the lower-income renters “where the immediate crisis lies”.

He also said the Housing Assistance Payment (HAP) was inadequate to enable those reliant on it to access housing. While for example the most a single person reliant on HAP may legally pay in rent in Dublin is between €430 (if sharing with others) and €600, average rents are over €2,000. The highest a family with children in Dublin may pay on HAP is €1,300.

“In our recent survey on HAP we found 20 per cent of those in receipt of it were paying more than a third of their net incomes on rent top-ups,” said Mr McCafferty.

Minister for Housing Eoghan Murphy said extending the rent pressure zones until 2021 to include institutional landlords would mean a new level of protection for tenants.

“We know there is more work to do, but there has been some progress. Last year there was a 25 per cent increase in the number of houses built and there will be an increase again this year,” he told RTÉ radio on Monday.

He called for more apartments to be built in other cities “to take the pressure off Dublin”.

1 All students will not return to school even if social distancing rules are relaxed – McHugh
2 Coronavirus: Further 9 deaths reported along with 46 new cases
3 Miriam Lord: Taoiseach is trapped in a Zoom session from hell
4 Emily Maitlis thanks BBC viewers for support after Cummings row
5 Brazilian gang held in Offaly had sub-machine gun and student visas
Real news has value SUBSCRIBE