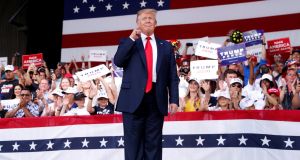 The Unite trade union has urged the Government to tell US president Donald Trump that he is not welcome to visit Ireland.

Delegates at the union’s policy conference in Malahide in north Dublin passed a motion opposing what it described as President Trump’s “racism, sexism and warmongering”.

The union said “his politics represents everything this union and many other trade unions globally fight against.”

Delegate Memet Uludaj said there was “not not one section of society or community -national or international - that this man has not offended, has not targeted or attacked”.

Mr Uludaj claimed Mr Trump is the world’s leading climate change denier. “He is happy to let the climate change go crazy at the expense of millions of lives and these will be — workers’ lives, the lives of poor people. “

Mr Uludaj said the motion did not mean the union was attacking American people and their choice.

“What we are saying is that we stand with the activists and campainers, millions of women in America who also have other grievances with their own president .

Fellow delegate Francis Loughlin said listening to Mr Trump was “like listening to a script from Sesame Street”.

He said with the erosion of environmental protection legislation, Trump has allowed American business to “play dirty again” and mortgage the future of the planet for short term gains at home.

“But its not only the Environmental Protection Act. It’s also workers’ rights that have been eroded — undermining health and safety laws, benefits, working hours and pay to make it easier for big business to make big profits at the cost of working citizens,” said Mr Loughlin.

“ We all lose out to the policies of this travesty of a president. His policies have an effect beyond the borders of the USA. So conference send a message - Mr President, you are not welcome here. “