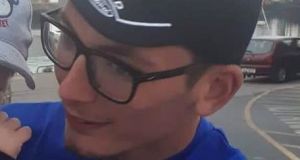 Ciarán Cave was killed in a workplace accident at Waterford Port. Source: Facebook

A young man killed at Waterford Port after he was crushed under a load of cargo has been described as a “everyone’s friend”.

Ciarán Cave (23) was killed at work in Belview, while emptying a trailer that was being offloaded at the port. The young man was caught and crushed under the cargo, believed to be a shipment of grain, and died.

The funeral mass took place on Monday morning at Mulrankin Church, a mile from where Mr Cave had been living, in the small Co Wexford village.

The incident occurred at 4:30pm on Friday, and the young man was pronounced dead at the scene by emergency responders.

The Health and Safety Authority (HSA) has launched an investigation into the matter, as is routine in cases of workplace fatalities.

“When someone dies that young it is always tragic,” he told The Irish Times.

“Mulrankin is a rural community, a small community, but tight knit. Something like this is felt very hard,” Rev Doyle said.

Mr Cave had been living with his grandparents, one of whom was ill, and had been helping to care for them, he said.

It is “such a sad situation”, and a loss that was “badly felt” by the family, the priest said.

“He was always so happy, had a passion for cars and lorries, and never stopped talking about how his car was greater than mine,” Mr Breslin said.

“He was caring for both his family and his friends, and we’re going to miss him dearly.”

Mr Cave had been working for a haulage company based in the nearby New Ross, who ship cargo through the port. Previously he had attended the local Bridgetown Vocational College secondary school.

Gardaí responded to the fatality at Waterford Port, Belview, which is located in Co Kilkenny, on the outskirts of Waterford city.

“A male was fatally injured when he was emptying his trailer and was caught under contents that were being offloaded. He was pronounced dead at the scene,” a Garda spokesman said.