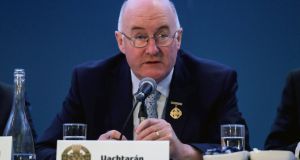 GAA president John Horan: “We hope everyone sees a place for themselves in the GAA and will join us for this service.” Photograph: Laszlo Geczo/Inpho

GAA president John Horan has said he hopes that an ecumenical service to be held in St Patrick’s Cathedral will encourage more Protestants to play Gaelic games.

The choral evensong will take place on Sunday, May 26th, in what is the national cathedral for the Church of Ireland. Both the Sam Maguire and Liam MacCarthy cups will be present.

Mr Horan said the perception exists that Protestants do not play Gaelic games and prefer sports such as hockey or rugby.

“This is a great opportunity to make a statement about how welcome they [Protestants] are within our organisation,” he said.

“We claim as an organisation to be non-political and areligious. This is a case of us acting out what we say we are by engaging in this assembly. It is great for both the Protestant community and the GAA.”

This is making a statement we are inclusive and welcoming. Race, colour or religion should not get in the way of people playing sport

Mr Horan suggested the perception that the GAA is a nationalist and therefore Catholic organisation is stronger in Northern Ireland than the Republic.

“This is making a statement we are inclusive and welcoming. Race, colour or religion should not get in the way of people playing sport,” he said. “I’m not expecting everyone of the Protestant faith to play our games, but any who does should feel comfortable when they do it.”

“It was courageous on her part,”he said. “There were people in her community who said she shouldn’t have done that. To me that was a positive step. She got a warm reception when she appeared at the game.

“People have to move forward, live in peace and harmony with each other and not have mistrust and acrimony going on”.

Sam Maguire is the most high-profile Protestant in the GAA’s history along with Jack Boothman, who was GAA president between 1994 and 1997.

Maguire, who was from a Church of Ireland family in Dunmanway, Co Cork, rose to prominence in the GAA as chairman of the London County Board following a successful playing career.

In 2017, the local parish and community, with the support of a grant from the GAA, restored the six original bells in the church tower while adding two new ones inscribed with Maguire’s name and dates.

The GAA’s recently launched the Where We All Belong campaign which is seeking to make the GAA as inclusive as possible in Irish society.

“We need look no further than one of the most iconic names in the GAA – Sam Maguire – to recognise the diversity that has helped make the GAA what it is today,” Mr Horan said.

“ That represents a call to action as much as a state of play and I hope this service embodies a modern GAA and a modern Ireland; one where we celebrate all cultures and faiths.

“We hope everyone sees a place for themselves in the GAA and will join us for this service.”

The Dean of St Patrick’s Cathedral, Dr William Morton, said: “We are very pleased to welcome the GAA to this special service.

“The historic connection between the GAA and the Church of Ireland broke new ground in times past. It’s vital to continue to stand together for inclusivity and welcome in an increasingly diverse world. ”

An open invitation is extended to all those who wish to attend the service.

1 Coronavirus: More ‘striking’ evidence BCG vaccine might protect against Covid-19
2 Boris Johnson in intensive care after coronavirus symptoms worsen
3 Genetics shed light on origins of Irish strains of Covid-19
4 Coronavirus: 16 more people have died in Republic as public urged to ‘have patience’
5 Irish doctors on getting Covid-19: ‘In 90 minutes, I deteriorated quite rapidly’
Real news has value SUBSCRIBE