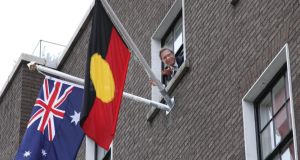 Australia’s Ambassador to Ireland, Gary Gray is pictured at the raising of the aboriginal flag at the Australian embassy on on St Stephens Green in Dublin on Friday. Photograph: Justin MacInnis/Mac Innes Photography

The Australian embassy on Dublin’s St Stephen Green has made history by being among the first diplomatic outpost of that country to permanently fly the Aboriginal flag.

It was raised as part of a digital ceremony which included the Australian minister for indigenous Australians, Ken Wyatt and Connacht Rugby’s John Porch. The ceremony also featured pre-recorded videos from Australian Aboriginal people living in Ireland.

President Michael D Higgins hailed the move in a Twitter post in which he congratulated the embassy.

President Higgins sends his congratulations to the Australian Embassy in Dublin.

The Embassy will today become the first Australian Embassy in the world to fly the Indigenous Aboriginal flag alongside the national flag, as a tribute to Australia’s first nation people. https://t.co/benlb1A9VE

The flag’s red lower half represents the red earth of Australia while the upper black band, emblematic of Aboriginal people, finishes the foundation for the central gold circle, symbolising the sun – the “protector and giver of life”.

“The acknowledgement of the historic and unique connection which Australian Aboriginal people have to the land and culture of our nation is utterly appropriate,” Australian ambassador to Ireland Gary Gray said.

“Though the flag has been flown from buildings in Australia and on specific dates elsewhere, the embassy in Dublin is among the first international posts to take the decision whereby the flag will fly with the Australian national flag all year round.”

“As with many countries around the world, some of Australia’s early history can be difficult to reconcile with the modern and open nation we have become today,” Mr Gray continued.

“Because of this, it was important to us to that the ceremony was both respectful and culturally sensitive as well as Covid-compliant. Working with the Aboriginal community here, as well as our minister Ken Wyatt, we are extremely proud to be able to recognise an integral part of Australia’s history and do our part in moving those conversations forward in a purposeful and thoughtful manner.”