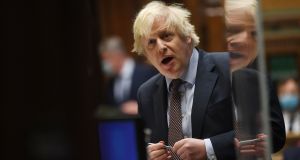 UK prime minister Boris Johnson: his government remains committed to the protocol and informed “at official level” the European Commission and the Government of its move. Photograph: Jessica Taylor/PA

US president Joe Biden is “unequivocal” in his support for the Belfast Agreement, the White House has said, following London’s surprise move to extend the grace period for post-Brexit checks on some goods entering Northern Ireland from Britain.

“It has been the bedrock of peace, stability and prosperity for all the people of Northern Ireland,” presidential spokeswoman Jen Psaki said of the agreement when asked by The Irish Times in Washington about the dispute over the operation of the protocol.

Under the protocol, checks should commence in April on some goods moving from Britain to Northern Ireland. However, in a unilateral move, the British government this week said it would extend the grace period until October, a decision that has escalated tensions between London, Brussels and Dublin.

London does not expect the arrangements for the inspections to be completed by October. Instead, senior sources said the checks would be partially rather than fully operating by then. The British government believes that the construction of the posts needed for the checks – suspended by the DUP minister Gordon Lyons last weekend – should continue.

Downing Street on Thursday defended the controversial decision, which prompted threats of legal action from Brussels, insisting it was not in breach of international law.

Prime minister Boris Johnson’s spokesman said the government remained committed to the protocol and that it had this week informed “at official level” the European Commission and the Irish Government of its move.

The EU and Ireland were only told on Tuesday that the unilateral action was being considered for Wednesday. It is understood both strongly cautioned against proceeding in such a manner.

The Government is to seek an urgent meeting with the Friends of Ireland Group in the US Congress about London’s move. It was agreed at a meeting of the Cabinet’s Brexit subcommittee on Thursday that Minister for Foreign Affairs Simon Coveney would reach out to the influential bipartisan group on the issue.

Ministers at the committee meeting, which is chaired by the Taoiseach, are understood to have expressed concerns that unionists were exaggerating the impact of the protocol on Northern Ireland.