ASTI warns there can be no cutbacks after Covid 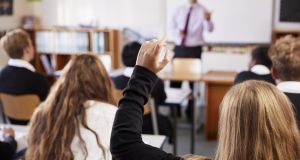 The general secretary of the ASTI says: ‘The system must be provided with the additional funding, resources and staffing to support young people in education recovery.’ Photograph: iStock

There can be no cutbacks introduced by Government when the current Covid-19 pandemic is over, second level teachers have insisted.

The general secretary of the ASTI (Association of Secondary Teachers Ireland) Kieran Christie told the union’s annual conference that the additional level of funding available to schools to deal with the current crisis must be the baseline for the future.

“The policies that undermined equality in education and drove many teachers from the profession must never be re-enacted. There must be no cutbacks when all this is over. Expansion and investment must be the only items on the agenda. Government must rise to the challenge. A new social contract must emerge that reshapes our society.

“The young people of Ireland have suffered an extremely traumatic experience over a sustained period of time. They must be properly supported as education begins to pick up the pieces and normal teaching and learning resumes. Unlike many precedents from before, schools must not be left alone and expected to work miracles. The system must be provided with the additional funding, resources and staffing to support young people in education recovery. They deserve no less.”

Mr Christie told delegates that there was no doubt that changes to senior cycle would be “the big item for us to deal with in the years to come”.

He said research commissioned by the union had identified issues such as initiative overload, increasing workload and lack of capacity at school level that must be addressed before major change at senior cycle could take place.

He said with the new public service pay deal, “ the largest pay discrimination still occurs in the early years of employment”.

“ New entrants to second-level teaching will still earn substantially less upon appointment than someone who entered the profession prior to 2011. And because the allowances issue remains to be addressed – the loss in career earnings will still be very considerable. It is clear that the professional masters in education qualification allowance must be restored and ASTI remains steadfastly committed to securing it.”

He said although members of the ASTI rejected the new pay deal in a ballot, because it was accepted by the majority of unions affiliated to the Irish Congress of Trade Unions overall, they were covered by its terms.