Coronavirus: Teachers and SNAs at special schools vaccinated ahead of schedule 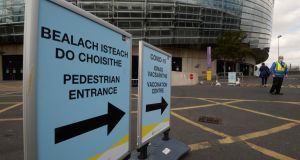 The Health Service Executive has apologised for an error which resulted in teachers, special needs assistants (SNAs) and support staff in special schools being vaccinated ahead of schedule.

It follows a Government decision last week to remove teachers from the priority list for vaccination in favour of an age-based approach.

Staff in special schools in the Dublin and Wicklow area were among a total of 191 people who were called from a reserve list to be vaccinated on Tuesday at the Aviva Stadium to “avoid wastage” .

In a statement, the HSE said it believed these staff had fitted into the category of frontline health worker, on the basis that they worked with many high-risk children with disabilities in residential settings.

“However they should not have been vaccinated... though the decisions to do so were made in good faith. We apologise for this error,” it said.

The Government’s decision to remove teachers from the priority list has sparked anger among teachers’ unions who voted on Wednesday morning to hold ballots for strike action unless they are reprioritised for vaccination by the end of the current school year.

Speaking on RTÉ, Minister for Health Stephen Donnelly said this was “not the right way” to compile a reserve list and he has asked the HSE for a detailed report into the matter.

He said he understood that the local HSE area was seeking to “do the right thing” but it had not followed the correct protocols.

Fórsa, the union which represents SNAs, said the development was “welcome” and called for all SNAs to be vaccinated.

“There are few other groups outside health and social care who work on a consistent basis providing intimate care without the ability to maintain social distancing,” said Andy Pike, the union’s head of education.

“In special schools, healthcare staff like nurses, occupational therapists and physiotherapists have all been vaccinated, whilst the SNAs who work alongside them have not,” he said.

The Irish National Teachers’ Organisation (INTO) also called for the vaccination approach to be expanded to teachers in these settings.

“We need that to continue and to be guaranteed to all workers in all our special schools,” said INTO general secretary John Boyle.

Earlier, the HSE said a total of 191 people were called from the reserve list after a group of people from a disability service provider did not arrive for their jabs due to a “misunderstanding around vaccine scheduling”.

“No vaccines were wasted and their appointments are being rescheduled,” the HSE said in a statement.

It said 613 vaccines were scheduled to take place at the stadium and that 506 were administered.

“We want to pay tribute to the vaccination centre staff for organising to fill the vaccine slots so quickly,” the HSE added.