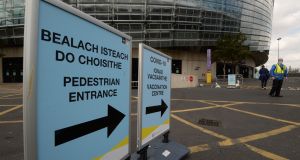 Covid 19 vaccinations continuing at the HSE vaccination centre in the Aviva stadium in Dublin this week. Photograph: Alan Betson

So said Taoiseach Micheál Martin, in his most recent address to the nation last week.

On Tuesday, Tánaiste Leo Varadkar said the vaccination programme would accelerate in the coming weeks. More than 80 per cent of people would receive their first dose by the end of June, he said, “and we hope to do even a bit better than that as well.”

“We’re going to surprise you,” he promised.

For the past month, senior Government figures have privately and publicly maintained that April, May and June will be make-or-break time for the vaccination programme. As the UK raced ahead in administering 30 million first doses, Ireland chafed under a lockdown that felt like it would never end.

Meanwhile, along with the rest of the EU, Ireland was forced to make the best of a supply of vaccines that seemed to slow to a trickle at times. But just wait until the second quarter, the Government pleaded.

Multiple times in recent weeks, Ministers and senior officials were asked can they do the big numbers. Every time, they said: Yes. Now it’s time to deliver. We will know in the next week or 10 days whether the big “ramp-up” (as everyone calls it) in the vaccination programme will happen according to plan.

The surge in the supply of vaccines has begun, with significant increases of the deliveries of the Pfizer shot in the past fortnight. The Department of Health says that it had taken delivery of more that 950,000 Pfizer doses by the end of week 12 – and another 112,000 AstraZeneca, 83,000 Pfizer and 40,000 Moderna vaccines arrived last week. Taken together with the other vaccines, it has taken in well over a million doses, and will deliver its millionth shot this week.

But both the department and the Health Service Executive are much sketchier about the prospects for the coming weeks. Both say the programme is “ramping up” (of course); but neither will say exactly by how much, and exactly when.

The HSE says it won’t release exact schedules of vaccine deliveries in the coming days and weeks. Nor will it say exactly how many people will be vaccinated each week, preferring to say that 95 per cent of available vaccines will be administered within a week of their arrival into the country.

Privately, several senior sources in both the HSE and the Department of Health admit that they won’t release exact numbers because they believe they get blamed when the deliveries don’t arrive. “Once we give out any number you guys will claim it was missed and everything is awful and chaotic, etc,” says one senior source.

The reticence to give detail on the performance of the vaccine programme goes beyond that, however.

HSE chief Paul Reid boasted at the weekend (and he was entitled to) that over 30,000 doses had been administered on Good Friday. But the HSE declined to say how many doses were done on Saturday, Sunday or Monday. The health authorities are understandably battered after an especially difficult few months. But it’s hard to escape the suspicion that their confidence about the performance of the programme in the crucial coming weeks is somewhat brittle.

The HSE insists it will administer up to a million doses a month over April, May and June. It’ll be about 860,000 this month, officials hope, “with higher numbers in May and June”.

Deliveries of the vaccines will arrive “at intervals through the month, involving perhaps 10 separate deliveries from the various manufacturers”.

If the Government is to keep its long-stated promises on vaccinations, the great acceleration needs to be happening now. Today. Yesterday. This week.

Reid was proud of the 30,000 in one day, but vaccinators will need to do that and more every single day – seven days a week, not five – if the million a month target is to be met. And this is no longer a target to be reached in the future: it needs to be done now.

The impact of the vaccine has seen outbreaks plummet to near-negligible levels in nursing homes, among healthcare workers and the over-85s. Can the big ramp-up deliver a similar effect in the general population? Only if it gets into their arms. Either way, we shall know soon enough.