Retail, cultural sites reopening possible from May 4th ‘if we hold firm’ 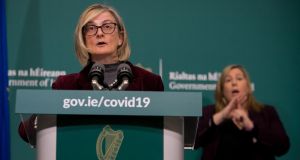 Liz Canavan, assistant secretary general at the Department of An Taoiseach said: ‘If we can hold firm for a little bit longer, and if the health situation allows, a further of easing of restrictions will be considered from May 4th.’ File photograph: Gareth Chaney/Collins

A further easing of Covid-19 restrictions from May onwards will be considered by the Cabinet “if we can hold firm for a little bit longer”, a government official has said.

Assistant secretary general at the Department of Taoiseach Liz Canavan said on Wednesday if we can hold firm and if the health situation allows, “a further easing of restrictions will be considered from May 4th. Areas being considered are the full reopening of construction, the phased return of non-essential retail starting with click and collect and outdoor retail like garden centres and nurseries, the recommencement of personal services on a staggered basis, reopening of museums, galleries and libraries and the recommencement of religious services on a staggered basis.”

From next Monday, people will be asked to “stay local” as the 5km limit on non-essential travel is eased to allow in-county travel along with journeys within a 20km radius across county borders.

Secondary school students from first to transition year will also return to schools for the first time this year.

Parents are being asked to “remain vigilant” for the remainder of the Easter break and are reminded play dates should be avoided.

Ms Canavan urged the public to “hang on a little longer as the reach and impact of the vaccine begins to take hold”.

Ms Canavan said new studies due to be released by Government show compliance with restrictions is still high and that one in five people have at least one close contact outside the home each day.

Workplaces and household visits account for the majority of close contact interactions and many of those visits involve essential work and caring.

Social visits are part of that, however. “What is more concerning is that the minority having social visits in households are taking fewer precautions than they were in early February. One in 10 people report hosting visitors or visiting another household for social reasons on any given day,” Ms Canavan said.

Most of these visits take place indoors with no masks, she said.

“These risks have resulted in a doubling of the proportion of the population who are having close contact encounters during social visits from 3.1 per cent to 6.7 per cent. Each of these visits typically involve two to three people from another household.

Workplace attendance has also increased and is driven by more non-essential workers attending their workplace, she said.

Traffic volumes were also up 11 per cent week on week.

Ms Canavan said the health service recently rolled out a number of walk-in coronavirus test centres for asymptomatic people. Between March 25th and April 5th, the HSE set up 12 such centres. Some 22,644 people have attended those centres of which those aged 25-44 made up nearly half of the walk-ins.

The overall positivity rate across the centres is 2.7 per cent with the highest rate in Finglas of 5 per cent.

Young people, aged between 16 and 24, have had the highest levels of infection, with a positivity rate of 4.46 per cent. However, adults between the ages of 24 and 40 have been the most enthusiastic cohort, making up 45 per cent of attendees.

As of Monday evening more than 8,700 tests had been conducted at the seven pop-up centres which opened late last week.

Good Friday was the busiest day for these newer sites, with 2,537 swabs taken. Three of these temporary sites are in Dublin (Finglas, Balbriggan and Crumlin), while there are also centres in Navan, Athlone, Ballinasloe and Naas. All of the centres are open daily from 11am to 7pm, with more than 1,390 tests conducted on Easter Sunday.

The centre at Crumlin GAA in south Dublin, which opened on Friday, recorded the second-highest proportion of positive results of the sites that continue to operate, with 3.63 per cent of tests detecting cases of the virus.

More testing centres will open later this week, Ms Canavan said, where there is the greatest risk of disease.

Meanwhile, a further five deaths from Covid-19 as well as 423 new confirmed cases of the virus were reported on Wednesday.

Four of the deaths occurred in April while one occurred in February. There have now been a total of 4,732 Covid-19 related deaths in the Republic.

There have been a total of 239,325 cases of the virus confirmed.

The highest 14-day incidence rate of disease per 100,000 population remains in Co Offaly where it stands at 366.9.

As of 8am on Wednesday, there were 232 Covid-19 patients in hospital, of which 56 were in intensive care. There had been 13 additional hospitalisations in the previous 24 hours.

Meanwhile, the National Immunisation Advisory Committee (NIAC) has said its standing advice regarding the AstraZeneca vaccine still applies following findings from the European Medicines Agency (EMA) and statements from the UK.

The EMA said it had found a possible link between the AstraZeneca Covid-19 vaccine and rare blood clotting issues in adults who had received the vaccine.

The regulatory agency concluded that the overall benefits of this highly effective vaccine in protecting recipients from severe Covid-19 disease, hospitalisation and death outweigh the risks of this very rare event.

NIAC said that, as previously advised, healthcare professionals and vaccine recipients should be informed that very rare, complicated clotting events have been reported in a small number of people who have recently received the AstraZeneca vaccine.

It added that officials will meet to discuss the EMA’s statement and consult with EU colleagues, as well as consider whether any further advice is required.