The European Medicines Agency has concluded that unusual blood clots are a rare side effect of the AstraZeneca Covid-19 vaccine, but that the health benefits of the protection it provides outweigh the risks. Video: EMA

The European Medicines Agency has concluded that unusual blood clots are a rare side effect of the AstraZeneca Covid-19 vaccine, but that the health benefits of the protection it provides outweigh the risks. Video: EMA 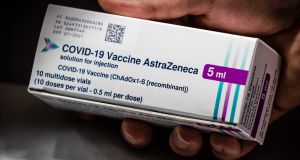 Previously the EMA said there was no evidence that the vaccine caused the clotting incidents. Photograph: EPA

The European Medicines Agency has concluded that unusual blood clots are a rare side effect of the AstraZeneca Covid-19 vaccine, but that the health benefits of the protection it provides from Covid-19 outweigh the risks.

“Our conclusion is that these clotting disorders are very rare side-effects of the vaccine,” said Dr Sabine Straus, chair of the EMA’s Pharmacovigilance Risk Assessment Committee.

The conclusion was based on a distinct clinical pattern, immunological findings, and the observation of “more reported vases than would be expected from the background rate of these unusual conditions”, she said.

Of 34 million people who had received the vaccine in the United Kingdom and the European Economic Area, the EMA has received reports of 169 cases of cerebral venous sinus thrombosis and 53 cases of splanchnic vein thrombosis – both rare kinds of blood clots.

The product information of the AstraZeneca vaccine will be updated to describe the conditions as a rare side effect of the vaccine, with a warning to be aware of early symptoms including severe persistent headache, blurred vision, and skin bruising beyond the site of injection.

Most of the cases were in women aged under 60, but the current evidence does not suggest age or gender is a risk factor for the side effects, the EMA said.

“It might be due to the fact that more women have been vaccinated,” Dr Straus said. Many countries initially gave the AstraZeneca vaccine to health workers, who tend to be women under 60. Now, countries including France and Germany have restricted the use of the vaccine to older groups because of the blood-clot cases.

EMA chief Dr Emer Cooke said the risk-benefit analysis would differ for different countries depending on their pandemic circumstances, that the regulator would continue to monitor the issue, and that there would probably be further recommendations in the future.

“Any national decision on the optimal use in vaccination campaigns will also take into account the pandemic situation in any individual country, and other factors such as hospitalisation and the availability of vaccines,” Dr Cooke said.

But she urged countries to continue to use the vaccines available.

“Our safety committee… has confirmed that the benefits of the AstraZeneca vaccine in preventing Covid-19 overall outweigh the risks of side effects,” Dr Cooke said.

“Covid-19 is a very serious disease with high hospitalisation and death rates and every day Covid is still causing thousands of deaths across the EU,” she added.

“This vaccine has been proved to be highly effective. It prevents severe disease and hospitalisation and it is saving lives. We need to use the vaccines we have to protect us from the devastating effects.”

The EMA’s safety committee, which was assessing the vaccine, has requested for more studies and changes to the current ones to get more information

EU health ministers are due to hold a vaccine rollout meeting at 5pm, the EU presidency said.

In the UK, the Medicines and Healthcare products Regulatory Agency (MHRA) said there were still huge benefits of the vaccine in preventing Covid-19 and serious disease.

However, due to a very small number of blood clots in younger people, those under the age of 30 will be offered Pfizer or Moderna instead.

Up to March 31st, the MHRA has received 79 reports of blood clots accompanied by low blood platelet count, all in people who had their first dose of the vaccine.

Of these 79, a total of 19 people have died, although it has not been established what the cause was in every case.

Some 14 cases of the 19 were cerebral venous sinus thrombosis (CVST), a specific type of clot that prevents blood from draining from the brain.

The other five cases were thrombosis.

The MHRA has concluded that the balance of risk for the vaccine is “very favourable for older people” but more finely balanced for younger groups.

Estonia on Wednesday suspended the use of the AstraZeneca coronavirus vaccine for people under the age of 60, the Baltic country’s public broadcaster reported.

It said the decision responded to reports that the vaccine may be associated with a rare blood-clotting syndrome and, quoting the head of the government’s scientific advisory council Irja Lutsar, said it would remain in effect pending further information being made available about the matter.

France and Germany have restricted the use of the AstraZeneca vaccine to older groups, while Norway and Denmark have yet to resume administering the jab after pausing it pending an investigation last month.