As Carrick-on-Shannon shops close, some blame hens and stags

‘I was often sitting here for eight hours not talking to anyone,’ says one owner 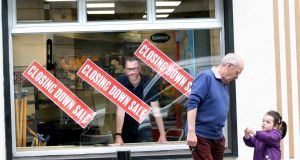 Jim Gartlan looks out the window of his shop, which closed on Friday. Photograph: Brian Farrell

Last Friday the shutters came down on three town centre shops in Carrick-on-Shannon and locals spent much of the day dropping in with good wishes and cards. A fourth shop in the Co Leitrim town had said a final farewell to customers the previous day.

Two of the businesses, Prior’s on Main Street and Gartlan’s on Bridge Street, were family-run newsagents that had survived for generations. Scented Meadows, a gift shop styling itself “the lavender experience”, opened in Carrick five years ago but, according to owner Nicoletta Pantano, she was closing for the sake of her sanity. “I was often sitting here for eight hours not talking to anyone, with no cars passing,” she explained.

A children’s clothing store, Sherbet, also shut last week, although it is to continue as an online business. Three more businesses have either recently closed or are preparing to go.

In a town frequently lauded in the tourist guides for its vibrancy and picturesque location on the banks of the Shannon, the closure of at least seven town centre shops is a talking point.

There are two motions before Monday’s meeting of Leitrim County Council urging that something be done. “Is there some reason for these closures that we can address?” independent councillor Enda Stenson is asking officials, echoing the bewilderment locally at the scale of closures.

The reasons are varied and complex, but the development of out-of-town retail parks and online shopping are being cited as factors. The proprietors of one popular boutique are closing for family reasons, while another boutique has little choice because the landlord is selling up.

The impact of Carrick’s popularity as a destination for hen and stag celebrations divides opinion, with some saying it kept the town going during difficult times, while others believe the regular weekend influx of revellers is keeping other potential customers away.

“Hens and stags bring €28 million annually to Carrick and create 800 jobs, including part-time work,” said Colm McGrath, president of the chamber of commerce. He agrees that seven shop closures is a cause of concern “in the short term, but medium to long term I think the future looks positive”. McGrath says that once funding is secured to improve the streetscape in Carrick, investment will follow.

Fellow chamber member Leslie O’Hora does not share his enthusiasm for hens and stags. “We have a population of 4,000 but get an extra 1,000 every weekend, most of them well-behaved but some obviously boisterous,” said the businessman. “Families will not come into town if there are people marching up and down the streets carrying inflatables and bottles and glasses.”

O’Hora, a business consultant and former Green Party election candidate, argues that only a handful of “superpubs” are benefiting from the hen and stag trade and says the same people provide accommodation and transport for the visitors. “It’s a beautiful town with fantastic hotels, 20 restaurants and some lovely boutique shops, but it is destroyed at weekends.”

Jim Gartlan, who sold tourist souvenirs in his newsagent, points out that 13,000 people reportedly visit the Rosebank retail park on the Dublin side of town every Saturday.

“People can get all they need on the edge of towns. It’s not just Carrick,” he said. His grandmother Eileen Murray started the business on Main Street in the late 1930s, a time when most families lived over their shops creating a close-knit town centre community.

Gartlan says “a combination of 20 different things” including a sharp drop in overseas visitors, made closure inevitable.

Colm Prior’s father, Denis, bought the business in 1953, “so after 65 years Prior’s is retiring”. Prior says the “last straw” for him was when the traffic flow was changed and commuters travelling from Leitrim and Drumshanbo could no longer turn right and pass his premises. “We were never consulted,” he said. “From the first day we saw a difference,” his partner, Bernadette Keenan, said.

They had no problem with hens ands stags, especially hens. “They’d come in for coffee and to buy confectionery for the kids before going home on Sunday. The lads, in fairness, were here to drink,” laughed Prior.

Claire McGovern, editor of the Leitrim Observer, believes there are multiple reasons for the spate of closures, including traffic issues. “The town is well known for being a bottle-neck as motorists cross over the bridge, and this can put off people coming into Carrick.”

Ms Pantano said lack of footfall on Main Street, “atrocious rates” and a drop in visitors from England and Northern Ireland forced her hand. “Some days we [traders] stand at the doors and say ‘Where are the people?’ ”