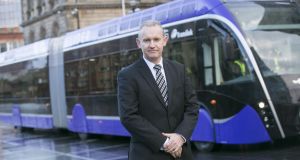 Belfast’s Glider system isn’t just about transportation; there is a social and political dimension, says Robin Totten of Translink.

The crash of Stormont almost 20 months ago put many major developments on hold in Northern Ireland but one that snuck through the gap was the £90 million (€100 million) Belfast rapid transit bus project, which amid some initial public annoyance and frustration, as well as hope, is about to start moving.

Glider is sweetly described by the marketing people as a bus system that will allow commuters to “glide through city traffic and arrive fresh and ready on a modern and high-tech mode of travel, providing direct cross-city services between the east and the west of the city and linking into Titanic Quarter”.

From Monday, when it officially starts, Belfast will learn whether Glider will fly.

There have been hitches. The new cross-town east-west routes involve the creation of special designated 12-hour bus lanes and the painting of many double yellow lines where hitherto people could park their cars.

In August, motorists in east Belfast complained of “horrendous” tailbacks on the Queen’s and Sydenham roads after one of the new restricted bus lanes was introduced.

The holdups got so bad that the Department for Infrastructure had to suspend the lane indefinitely.

There were also mutterings about people having to walk too far to get on board the new distinctive violet-coloured buses as “halts” are about 400m apart. This means a reduction in bus stops on Glider routes by about a third.

On Thursday, Mr Carroll joined parents when some of them illegally parked on the bus lanes in west Belfast as they left off their children to school. People who park in such areas face £90 fines. There were no fines on Thursday but motorists who flout the rules can expect to be penalised in the future.

Private taxi drivers also complain that they can’t use the routes although Belfast’s black taxis, the bigger bus-type taxis, cyclists, motorcyclists and the emergency services can.

Ciarán de Búrca of the Department for Infrastructure, and Robin Totten of Translink which runs 95 per cent of Northern’s bus and rail services, were expecting such “teething problems” and have appealed for public patience.

They say Glider isn’t just about transportation, and that there is an important social and political dimension to the changes.

That was reflected, said Mr Totten, during the week when some elderly women took trial Glider services from the Falls Road in nationalist and republican west Belfast to Dundonald in predominantly unionist and loyalist east Belfast.

Currently, Belfast city centre is the hub with services radiating from the centre. With Glider, commuters can travel east to west and vice versa through the city centre with spurs to the developing Titanic Quarter.

Mr de Burca also emphasised the social importance of Glider: “When Peter Robinson and Martin McGuinness were in office the main thing they said the Belfast Rapid Transit system was about was social integration and social regeneration. We are linking the communities together, and that is a huge thing.”

A Tipperary man, Mr de Búrca is an expert in such radical transport shifts. Previously in Dublin City Council he was involved in making Grafton Street pedestrianised, altering transport flows on the Dublin Quays and assisting in the introduction of the Luas and the port tunnel.

Had he stayed in Dublin he would have been involved in the BusConnect plans to reshape the Dublin bus network. Part of that plan envisions orbital routes where commuters can avoid the city centre if they’re travelling across Dublin, but controversially it would also mean that people might have to take two journeys getting into town.

For BusConnect to work, said Mr de Burca, it will be vital that people on two journeys are not left waiting long for connections. “The most important part of the journey is the last mile,” he said.

Mr de Burca came to Belfast 10 years ago with the job of persuading more people to walk, cycle and use public transport.

Glider is a sort of a poor man’s Luas. It is estimated that a Belfast light rail system would have cost £1 billion compared to the £90 million price tag for Glider.

The articulated Van Hool Glider buses can carry 105 passengers – 63 of them standing – compared to single and double deckers which respectively carry 54 and 74 passengers. “One 18 metre Glider bus is the equivalent of a half kilometre of cars,” explained Mr de Búrca, outlining how the system can ease congestion.

Translink has 30 Glider diesel/electric buses with two more on order. Services are scheduled to operate between 5am and midnight with high-frequency services every seven-eight minutes during the working day.

Commuters pay at ticket machines at the Glider halts rather than on the buses, which also will assist in reducing travel times. Anyone cadging a free journey could be confronted by “customer revenue and protection officers” imposing £50 fines.