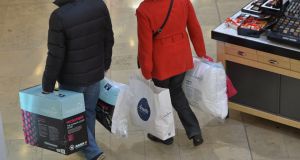 A small percentage of Arnotts’ stock was being held in the UK, leading to the misplaced charges, The Irish Times understands. File photograph: Alan Betson

Brexit-related teething problems have been blamed for dozens of Arnotts shoppers being hit with additional taxes and charges after buying shoes on the Dublin-based department store’s website since the start of the year.

As many as 100 customers of the Henry Street retailer were left dismayed and confused when they received follow-up communication from delivery company DHL to say their items had attracted taxes and charges as they were coming from the UK.

One customer ordered two items from the shop – a skirt and a pair of Kurt Geiger shoes for €130. She said the skirt arrived without any problems but days later she received a text message from the delivery company looking for an additional €41.80 to cover “import duty/tax and advance fee”.

She expressed confusion as to how shopping on the Arnotts website could possibly attract additional taxes and fees.

The good news is they do not. A spokeswoman for the retailer confirmed that up to 100 people who had made purchases on the site had been asked to pay additional taxes and handling charges by a delivery company but she stressed it was an administrative error and that no money was due.

“There is no additional VAT on any Arnotts.ie purchases for goods ordered online,” the spokeswoman told The Irish Times.

While most of the stock sold on the Arnotts website is held in warehouses in Ireland, The Irish Times understands that a small percentage, which was caught up in the confusion, was in the UK, leading to the misplaced charges.

DHL said a third-party vendor had quoted it “the incorrect shipping terms in declaring the shipments to DHL, which resulted in VAT being incorrectly applied to the shipments on importation into Ireland”.

Arnotts is owned by the Selfridges group of department stores, which is based in the UK.