Brexit: Ireland to explore easing of checks on food and animals 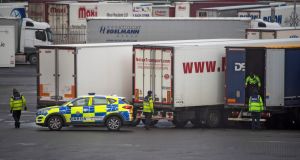 The Department of Agriculture plans to explore whether Brexit border checks on food can be eased under the EU-UK trade agreement to allow Irish-British supplies to flow more smoothly.

There is scope under the agreement to review regulatory health border checks on food of animal and plant origin, live animals and plants – also known as sanitary and phytosanitary (SPS) checks – by veterinary and food safety inspectors.

The food industry has called for the border checks to be reviewed and relaxed under the terms of the agreement because of concerns that the checks are delaying food shipments and adding costs across long-established and highly integrated supply chains between Ireland and Britain.

New border controls that came into effect when the UK’s departure from the EU came into effect on December 31st have delayed food and other imports into the State and led to shortages on the food shelves of some Irish outlets of UK supermarket chains, including Marks & Spencer.

Food and transport firms have complained that the requirement to give the department 24 hours’ notice of an import was adding to the delays in transporting food consignments from Britain where, prior to Brexit, they could be ordered and shipped on the same day.

The SPS checks, carried out by the department at separate facilities to customs inspections – for the most part at Dublin Port – are strictly enforced under EU single market rules to protect the economic bloc from disease, pests or contaminants.

All consignments must undergo documentary and identity checks but some face physical inspections and, under EU regulations, food safety inspectors must conduct physical checks on 50 per cent of consignments of the highest-risk food products such as poultry, milk, egg and honey.

Food Drink Ireland, part of business group Ibec that represents the food industry, said the checks, paperwork and certification were introducing friction, inflexibility and costs into the supply chain.

It has called for SPS facilitation and easement measures under the part of the trade agreement that allows the EU and UK to establish a trade specialised committee on sanitary and phytosanitary measures that can review border checks in order to facilitate trade.

A spokeswoman for the department said the committee would be responsible for regularly reviewing SPS measures applied by the EU and the UK, including certification requirements and border clearance processes, and its agenda would be set by mutual agreement by both sides.