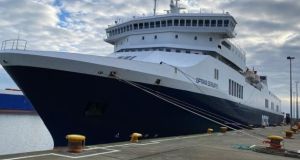 Hauliers are booked onto the new Rosslare to Dunkirk service operated by shipping line DFDS.

Capacity issues are building on direct ferries between Ireland and mainland Europe as lorries avoiding Brexit checks through Britain are “bumped” to make way for vital imports of medicines and medical equipment.

Hauliers booked onto the new Rosslare to Dunkirk service operated by shipping line DFDS have complained that bookings are not being honoured where the ferries are overbooked.

This has caused problems for hauliers seeking certainty to transport fresh food to and from mainland Europe as they avoid delays at post-Brexit border controls on Irish-British routes.

Disruption to the supply chain through the UK landbridge has forced importers and exporters to rely more heavily on limited direct services between Rosslare and French ports.

Aidan Coffey, route director of DFDS, which started a new ferry service between Rosslare and Dunkirk on January 2nd, defended the shipping line’s booking system, saying that it was trying to accommodate as many requests as possible but that it has been “overwhelmed” by bookings.

The company had to be “as fair as we possibly can” but had given a commitment to the HSE and Department of Transport to prioritise the transport of medicine and medical supplies.

A DFDS “priority ship” brought in a mobile Covid testing lab on the 24-hour sailing from Dunkirk to Rosslare on Monday night.

“It is a trying time for everybody in transport and shipping. Systems are under pressure.”

Mr Coffey described the landbridge - over which about 150,000 Irish trucks cross every year - as a “no go” because of post-Brexit customs and regulatory checks blocking up supply chains.

Stena Line and Brittany Ferries are also operating direct services but there has been strong demand for these ferries too because of delays from Brexit border controls at Irish Sea ports.

The Irish Ferries WB Yeats ship has been switched, three months ahead of plan, from the Irish Sea Dublin-Holyhead route to the Dublin-Cherbourg route to transport Irish freight directly to mainland Europe, reflecting the decline in the use of British landbridge by Irish hauliers.

The haulage industry has called on the Department of Transport to review urgently the capacity on direct routes and urged a temporary solution by moving extra ferry capacity from Irish Sea to direct routes as ferry operators cancel sailings between Ireland and Britain.

Aidan Flynn, general manager of Freight Transport Association Ireland, said that there was “over-demand” for direct ferries in an “unusually quiet period.”

“If capacity isn’t increased urgently, the Irish supply chain will struggle,” he said.

He questioned the accuracy of the recent assessment by the Irish Maritime Development Office that there was “enough capacity” on the mainland Europe ferries.

“The fact that hauliers with bookings on direct services are being bounced because of overbooking demonstrates that this theory has been challenged,” he said.

Mr Coffey said that DFDS was not deliberately over-booking ferries but that it did have an issue where its system was issuing too many standby bookings.

“They were only on standby where the hauliers should have actually waited to get a confirmed booking before travelling. Some of them actually travelled to the port,” he said.

There were reports of 20 lorries being stranded at Rosslare last weekend.

Asked whether the ferry company was considering adding more direct routes and sailings to its service, Mr Coffey said that DFDS was “looking at alternatives.”

“We are getting everybody we can on but we don’t have a magic wand. We can’t fix everyone’s problems,” he said.

Haulier Laurence O’Toole, managing director of Co Galway-based O’Toole Transport, a transport of fresh Irish seafood, said that solutions were needed quickly to guarantee the cross-border transport of Irish goods through the Brexit checks at Irish, British and French ports.

“The new direct ferries haven’t got near enough capacity. We need another 20 ships per week going to Europe,” he said.

“I can’t begin to imagine what it will be like once holidaymakers start moving again.”