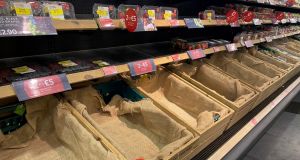 Lorry drivers are bringing imports into the State from Britain through Northern Ireland to avoid the Brexit customs and regulatory procedures at Dublin Port that have delayed shipments.

Businesses moving goods from Britain have struggled to complete the necessary customs documents on Revenue’s new IT systems and lorries have been turned away from Irish-bound ferries at Holyhead in Wales because of incorrect paperwork.

Revenue’s temporary relaxation of one customs procedure last week, aimed at getting held-up goods moving again, has resulted in just a small number of lorries getting through, as firms still struggle to cope with new border controls nearly two weeks since Brexit came into effect.

An industry source said that the number of lorries being turned away at Holyhead had dropped from 20 per cent of all trucks arriving at the port, to less than 10 per cent as a result of Revenue’s easing of the requirement to file safety and security declarations on goods.

Problems are said to be further back in the supply chain, at haulage yards and distributions hubs, where lorries are not leaving with consignments for the Republic because the paperwork is not correct.

Firms are not sending lorries due to the Revenue system, particularly for “groupage” loads where lorries carry multiple consignments with each consignment requiring its own customs paperwork, leading to incomplete declarations for each lorry and delays in shipments.

“They are all sending them via Northern Ireland and if that isn’t sorted, it could become permanent. The Irish Government is naturally worried about this but there is still a lack of action,” said an industry source with first-hand knowledge of the problems.

The Government has advised importers to ship goods on direct ferries from mainland Europe to avoid the UK landbridge and Brexit checks. However hauliers are choosing to move more goods through Northern Ireland.

Eugene Drennan, president of the Irish Road Haulage Association, said that the State’s hauliers, particularly those close to the Border, were finding it easier to transport imports from Britain through Northern Ireland. Before Brexit they would have gone through Dublin Port. He said lorry drivers were leaving on ferries from the Scottish port of Cairnryan to Belfast and Larne in Northern Ireland faster than drivers are getting through Holyhead because there were more efficient systems in place between customs officials in Northern Ireland and Scotland.

“There is definitely more movement there. They seem to be talking to each other a bit easier and there is an ease of paperwork and coming and going,” he said.

Revenue temporarily relaxed one customs requirement last week, providing traders with a general code to avoid the completion of entry summary declarations, a form known as an ENS, which companies are legally obliged to submit to customs to import goods from Britain.

Importers want Revenue to go further by issuing another code to cover a pre-boarding notification (PBN), an identifier code required to allow companies to book lorries on to ferries to the Republic.

However Revenue has said that removing the requirement for a PBN would not remove the obligation on companies to submit customs declaration forms, would lead to “difficulties and delays” while doing “nothing for realising the objective of facilitating legitimate trade”.

The State agency has defended its new customs procedures and said that problems have arisen because businesses failed to heed its warnings for more than two years to prepare for Brexit.