Covid-19: Hospital defends vaccination of staff not working on frontline 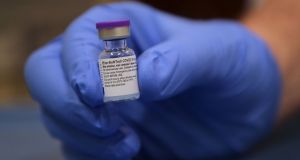 St Vincent’s University Hospital in Dublin has defended giving the Covid-19 vaccine to non-frontline staff who are not officially due to receive it until later in the Government’s immunisation plan. Photograph: Nick Bradshaw/The Irish Times.

St Vincent’s University Hospital in Dublin has defended giving the Covid-19 vaccine to non-frontline staff who were not officially due to receive it until later in the Government’s immunisation plan.

It was responding to claims made by intensive care (ICU) staff to The Irish Times about senior staff members who are not treating patients being given the vaccine last week ahead of some frontline workers.

One member of ICU staff said some senior staff were vaccinated during the first day of immunisation intended for frontline workers. Later that day, it is alleged, a number of ICU staff were refused the vaccine, though all received it later in the week.

The incident caused great upset among workers who have been treating Covid-19 patients for months during the pandemic, the ICU staff member said.

A spokeswoman for the hospital said the HSE had issued an allocation of doses based on a headcount of staff and that frontline workers were given priority.

“Staff, including the CEO, who in the course of their duties may be on wards or in direct contact with patients and staff are then offered the vaccine, followed by all other staff who in a surge may be redeployed to support frontline staff,” she said.

“In certain instances non-frontline staff have received the vaccine to ensure that no vaccine is wasted.”

She said that on the first day of the immunisation programme, a glitch occurred and the provision of the jab to some ICU staff had to be deferred as they were not registered. This was caused by an error in the booking system that was later rectified. The hospital hopes to have vaccinated all its 3,035 staff by the end of the week, she said.

The Irish Times has received a number of claims by health workers that non-frontline colleagues are being vaccinated in their areas of the health service.

Under the Government’s vaccine implementation plan, supplies are currently focussed on two priority groups, frontline healthcare workers and residents and staff of care homes. In some instances, people from other groups have been vaccinated so that live supplies are used up.

The Pfizer/BioNTech vaccine must be used within five days of being removed from ultra cold storage. Supplies can be made to stretch further by extracting six doses from each vial, instead of the five originally envisaged.

Prof Karina Butler, chair of the National Immunisation Advisory Committee, said “you don’t want people who are not on the frontline to be leapfrogging over others at greater risk”.

But she said hospitals have to retain some flexibility in the way they allocate supplies. It may also be important for people “in leadership roles” to get vaccinated early in order to help develop public confidence in Covid-19 vaccines.

Prof Butler said a balance had to be struck in distributing the vaccine and ensuring there was no waste.

“You aim for fairness and equity, but you don’t want to get too rigidly confined. In trying to do the best you can, it’s important not to let the perfect become the enemy of the good,” she said.

Discussions about prioritisation involved “difficult considerations”, she added, with many groups making valid cases for getting the vaccine earlier.

“But in a pandemic situation, for public health purposes, you sometimes have to draw uncomfortable lines in order to be able to roll out a vaccine effectively in the population.”