Army was woefully unprepared for the Troubles, book states 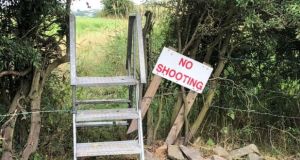 Pictured is the Monaghan Way, near the border with south Armagh.

The extent to which the Army was unprepared for the outbreak of the Troubles in Northern Ireland has been revealed in a recent book by a former officer.

Taoiseach Jack Lynch ordered the Army north to the Border in August 1969 following riots in Belfast and Derry which left many dead and injured.

He had warned in his famous televised speech on August 13th, 1969 that the Irish Government would not “stand by” and allow more people to be wounded or worse in the North.

The Army set up field hospitals along the border in Co Donegal, but retired colonel Dan Harvey’s book Soldiering Against Subversion features interviews with officers who said they were woefully ill-equipped for the task that lay ahead.

The interviews were conducted with dozens of soldiers up to the rank of chief of staff though most gave their testimony anonymously.

One senior officer said the Army in 1969 was “idle and inept” with a shortage of manpower and out-of-date equipment. Pay in the Army was poor and the defence budget was constantly being squeezed.

Custume Barracks in Athlone, the headquarters of Western Command, was tasked with co-ordinating transport to the Border, but it all had to be co-ordinated from a single landline which was constantly jammed.

The anonymous officer recalled: “The frustration was immense, the progress impeded, headway hindered, advance obstructed and the time factor critical. You had to hang up and wait your turn in the queue for the external landline again.”

Jadotville veteran Captain Noel Carey said the 600 soldiers based in Camp Arrow near Letterkenny, Co Donegal were left there in “ridiculous” circumstances at the start of the Troubles.

“Our equipment was outdated, we had no combat uniforms, no wet gear, no sleeping bags and our radios were primitive,” he remembered.

“The helmets were of first World War era and our webbing was from the second World War.”

Nevertheless, he believed they were psychologically prepared to cross the Border if necessary into Derry to protect the nationalist community and many were disappointed when the call to move never came.

One said: “We had a concern for how our fellow nationalists were being treated, brought up as we were on a definite dogma that the Irish were nationalists only and we had justification to go in. It was all very polarising and upsetting.”

Harvey concluded that the Government had made no contingencies for the Troubles in Northern Ireland despite ample evidence of the worsening situation which began when the RUC broke up a civil rights demonstration in Derry on October 5th, 1968.

“Aware of a growing problem on its doorstep, the Defence Forces were grossly under-prepared for its outbreak and the early days of the crisis - a period of considerable danger - proved to be a time of great difficulty,” he writes.

Nevertheless, the army adapted to its role in the Troubles as the aid to the civilian power (ATCP) and the gardaí were in the vanguard of actions against the Provisional IRA.

Only one Irish soldier was killed during the Troubles, Private Patrick Kelly, who was killed during a shoot out at Derrada Woods, Ballinamore, Co Leitrim in December 1983. Dozens of others were injured though General Order No 8 of the IRA’s “Green Book” of rules, states that “volunteers are strictly forbidden to take any military action against 26 County forces under any circumstances whatsoever”.

Harvey concluded that the security of the state was a “close run thing” and there were several times when the violence could have spread to the South, most notably after Bloody Sunday in 1972 and during the hunger strikes of 1981.

The seizure of the Eksund in 1987 with its cargo of 1,000 AK-47s, two tonnes of Semtex and 120 rocket propelled grenades was vital, Harvey maintains, in preventing an escalation of the Troubles as such a massive cache of arms might have made a huge difference to the Provisional IRA’s campaign.

Harvey believes a debt of gratitude is owed to both the Defence Forces and An Garda Siochana for protecting the people against subversives who would destroy the State.

“The very existence of wholly illegal armed organisations was then and remains today complete anathema to the very basis of a democracy and is against the will of the people,” Mr Harvey said.

“In containing the serious, complex and ever-changing challenge from various paramilitary subversive groups, by far the most lethal amongst them, the Provisional IRA, the Defence Forces were called upon to defend democracy, the institutions of the state, the unarmed police and a vulnerable people. They had therefore to ‘ stand in the gap ‘sometimes quite literally between law and order and complete anarchy.”

Soldiering Against Subversion is published by Merrion Press priced €19.99.