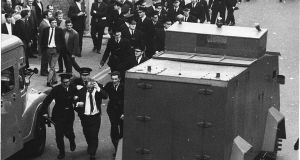 Man being led away past a police waterwagon after he was injured during the police baton charge at the civil rights march.

A thud. I didn’t know what hit me. Rapid pulsating in my head. With the second clout, reality struck. Christ, it’s a baton. I’m hit. Shouting “press, press” was no shield. Another couple of whacks landed.

The Derry Journal reported: “Among those treated at Altnagelvin Hospital for injuries sustained in the Duke St scenes was a member of the ‘Journal’ reporting staff, 18-year-old Martin Cowley. ”

Talking to a colleague who wrote that report, I described being caught between two converging lines of police, batoned, falling twice and finally being hit with a blackthorn stick.

“I saw a senior police officer and heard him say to the other policemen, ‘That’s the boy.’ This officer struck me with his stick. I was hit five or six times.”

Ivan Cooper, of the Derry Citizens’ Action Committee, protested that I was a reporter and should be taken to hospital. My attacker wore a distinctive green uniform and Sam Brown belt, complete with a long, varnished, blackthorn stick.

Some weeks later I wrote a personal statement in which I identified him as District Inspector Ross McGimpsey, Derry’s police commander. A man I knew, if only through work.

Seeing him, I remember that I had felt a bit relieved. I thought he would know me. He turned to me and I was waiting for him to give some sign of recognition but he did not. Instead, the blows rained.

I was not on duty for the Journal on Duke Street. That was a task for a senior reporter, not a cub. Tension about the march was high all week, however, and I was not going to miss it.

Like all my friends, however, I was a civil rights supporter. Equally, I knew many of the march’s organisers, having watched and reported on earlier protests.

We were a very politically aware age group, our antennae sharpened by the downgrading of Derry in the creation of Craigavon as a new city and the choice of Coleraine for the region’s new university.

Even as children, we knew Derry was disputed territory. Each day, we passed “Release the republican prisoners” painted in white letters on the blackened gas yard wall as we went to school.

In December dusk the flaming effigy of unionist hate figure, “Lundy the Traitor”, swirled on the city walls high above the Bogside, visible across the largely Catholic city side of the Foyle.

In 1966, I heard “We Shall Overcome” sung for the first time in Derry. In elections, we threw ourselves into canvassing, delivering leaflets, or holding placards for Liberal, Nationalist and Labour candidates.

I joined the nationalist Derry Journal in February 1968. A month or two later I made my way to a dilapidated villa where three or four young families lived in a single room each.

Furtively ushering me in, an occupant was apprehensive; fearful that a guard dog or the landlord would spot me. There, I talked to two young couples, surrounded by the clutter of personal belongings, household chattels and bulky prams, and infants asleep or toddling around and articles of freshly washed clothing stretched out to dry in the cramped and airless conditions.

Housing conditions such as these were the trigger points in the decision of the Derry Housing Action Committee and members of Derry Labour Party to organise the October 5th march under the Northern Ireland Civil Rights Association (NICRA) banner.

Today, the Duke Street tumult is seen as a day that changed the flow of history, due in no small part to RTÉ’s cameraman Gay O’Brien and sound recordist Eamon Hayes.

The standout clip is demonstrator Pat Douglas going toe to toe with the police phalanx pleading for restraint. “Gentlemen, please, for God’s sake,” he enjoins before emitting a sudden roar of anguished pain when he is jabbed below the belt by a baton.

The footage shows a youth in a grey suit sprawling and under the lash of a blackthorn stick. That was me. While down, I get another crack from a constable who just happens to be passing.

Eventually, I was taken to hospital after Fred Heatley, the NI Civil Rights Association’s treasurer, had pleaded with a sergeant that I should be taken to hospital. When I arrived at the hospital, my handkerchief was sodden with blood and it was thrown [away] by a nurse who told me that I wouldn’t be needing that again.

The film has been shown countless times, but it was years before I could bring myself to look at it. The personal statement that I made weeks later, the one where I identified McGimpsey as my attacker, I banished it from my mind.

Unknown to me, however, an envelope containing a carbon copy of the five faded pages of old-style newsroom copy paper held by a rusted clip had lain for decades in a drawer in my late mother’s house.

Last year, it came into the possession of my sister. Later, she gave it to me.

I read it for the first time last April while researching a chapter for a book about journalists’ memories of reporting the Troubles*.

Even then, though five decades had passed, it was a difficult read, reviving long-forgotten or repressed details of Duke Street, 1968, and scores of other unwanted memories.

Martin Cowley is a former London editor of The Irish Times and Reuters Ireland correspondent.