Today, 50 years ago, the Troubles began 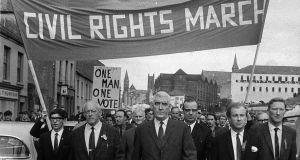 As a child, Caitriona Walsh’s biggest fear was going through the Bogside.

Now a 16-year-old student at St Mary’s College in Derry, she remembers how she found the echoes of violence in the area’s famous murals frightening.

“Petrol bombs and things like that, they just terrify me.”

Born in 2002, for Walsh the worst of the Troubles was something to be viewed – reluctantly – on television. “The thing that scares me most is when you see the clips of the violence on TV.”

Among the many images that will be shown this weekend are the graphic scenes from Derry’s Duke Street where, 50 years ago, a civil rights march was attacked by police.

The presence of an RTÉ camera crew ensured that the images of the beaten and bloodied marchers were seen around the world. Northern Ireland was suddenly in the global spotlight; in the years since, it has come to be regarded as the day the Troubles began.

Walsh is from Ballymagroarty, a Nationalist area in the west of the city with high levels of social and economic deprivation, and which still lives with the legacy of the Troubles. A month ago, a man was shot in the leg in the area in a paramilitary-style attack.

Walsh – a keen actor who dreams of studying drama at Rada in London – is currently involved in a Peace IV-funded play about punishment shootings: “It’s about two boys, and one of them is getting into really anti-social behaviour, and the other one is going to threaten that if he doesn’t get out of Derry, there’ll be consequences,” she explains.

Despite the significant gains made by the civil rights movement in the months after Duke Street, the question of equality remains a live issue in the North. Abortion and gay marriage remains illegal in Northern Ireland, even though both are available everywhere else in the UK.

Fifty years ago, Andy Hinds was also a student – 18 years old and attending St Columb’s College. On October 5th, 1968 he joined the civil rights march because he had seen first-hand the poor conditions then facing many Catholic families in Derry. “I just thought it was so unjust.”

The next day images of him being beaten by policemen, batons held aloft, then dragged down the street, apparently unconscious, made front pages around the world.

Hinds had been standing on Duke Street, watching in shock as his friend was beaten across the back by a District Inspector with a blackthorn stick.

“The next thing I was grabbed myself, and this voice said, ‘I’ve got one.’”

Hinds clung to a lamppost; two policemen beat his hands with their batons to try to get him to let go; another hit him on the back.

“I was dragged along the street and some people thought I must be unconscious because my eyes were closed, no, I was just dazed.

“I remember I did consciously close my eyes and think I don’t know what’s going to happen to me but there’s nothing I can do about it.”

Hinds was thrown into the back of a police Land Rover filled with riot gear, then taken to a cell. He was there for hours, head bleeding profusely, listening as other marchers in a cell next door sang “We Shall Overcome”.

“I was on my own and I began to think that because of my wounds, because my head was bleeding, they didn’t want anybody to see me because I was sort of a living testament to what had happened.”

Later, at home, his mother bandaged his head. “I remember she said, ‘Andy, the lid’s come off the cauldron.’

“That night there were fires, and rioting for two or three days I think, and the Troubles started.”

Everything had changed “in seconds”, according to former MP and civil rights campaigner Bernadette McAliskey, then Devlin.

“You were walking towards the police and suddenly everybody’s running, and the police are beating everybody up.

“I think that was an abiding change for me. You could never look at the police in the same light again.”

Deirdre Doherty remembers how she and her mother had given Gerry Fitt, then the Republican Labour MP for west Belfast, tea and sandwiches in their house on the morning of the march.

Doherty would run into a cafe to escape the police, hiding her bloodstained coat and pretended to be reading a menu in order to avoid the policeman who, minutes later, burst inside.

“I remember the RUC man with his baton, it was dripping with blood. I’ll never forget the look of hatred on his face.”

A student radiographer, she hitched a lift to Altnagelvin hospital in an ambulance packed with wounded. She would X-ray 44 skulls that day, among them, Fitt’s.

Michael Doherty [no relation] was working in his father’s barber’s shop on Duke Street when “we heard the commotion on the street and people running”.

“Suddenly the door burst open, and there were people coming in to get away from the police and people bringing in the injured.”

Their towels were used to staunch the blood. “Everybody was afraid the police were going to come in after them,” recalls Doherty. “Then in the middle of it all we had people’s hair nearly cut.”

Fifty years on, his memories and others have again been given voice in the multiplicity of commemorative events in Derry and elsewhere in the North.

Last week McLoughlin told of his experiences at an event in the Museum of Free Derry in the heart of the city’s Bogside; at the same time, the DUP MP Gregory Campbell and others spoke in Campsie, just outside Derry, on the “exodus” of the Protestant population from the predominantly Catholic west bank of the river Foyle to the east bank at the start of the Troubles.

At Lisneal College – a secondary school with a predominantly Protestant intake – the head boy, 18-year-old Elliott Tait, explains that he learned about the civil rights movement in GCSE history – “I think in essence it was a good idea but it was hijacked by the gunmen” – but says he feels the Protestant experience should not be forgotten about.

“It wasn’t just the Catholic population that lived in poverty or that were treated unjustly.”

His school principal, Michael Allen, interjects. “I’ve experience of the exodus in my family where a gun was put in a family member’s face and they were told to get out.

“I don’t think anybody with a heart could say that the civil rights movement was wrong, it was 100 per cent right and Catholics were treated like dirt in many cases, and a lot of Protestants and unionists would have no problem in saying that. Change did need to happen.

“But after the march and the events on Bloody Sunday, I’m not saying it has been, but it feels to many of the unionist and protestant persuasion in this city, that that has been the bat to beat unionists and Protestants with.

“That is why I think with civil rights it probably took me until my mid-30s or 40s until I could say it was legitimate.

“But to say that the Protestants had it all and we oppressed them is insulting really because I don’t think anybody in this city has it particularly good.”

Today’s pupils have choices that would have been virtually unthinkable for those in their position 50 years ago. Walsh dreams of going to London to study drama at Rada and is adamant that she does not want to stay in the North.

“For me, Northern Ireland gives you so little opportunity,” she says. “I don’t want to be somewhere it’s all about what religion you are.”

Lisneal and St Mary’s take part in a shared education programme which promotes reconciliation and enhances educational achievement for students by educating them together.

It means, says Lisneal head girl Amy Campbell, that when she meets students from St Mary’s outside of class, they do so as friends.

“When you go out, you know each other. You’re friends; there’s nothing stopping you.”

Walsh echoes this: “I don’t consider myself a unionist or a nationalist, I’m just a person. I don’t want to be defined as a label. I’m a Catholic and I respect my religion, but I don’t want to be associated with this or that party.”

It is something Hinds would have applauded. Around the time of the Duke Street march he was expelled from school for trying to organise a student council; pupils from the city’s schools, Catholic and Protestant, later held their own protest to try – unsuccessfully – to have him reinstated. He went on to win acclaim as a theatre director in Dublin and London; he is now a writer.

“If you’re living in Northern Ireland, really you are still living with the consequences of it,” he says.

“A lot of people in that audience would have lost people, had people injured, had people who emigrated, so the living consequences of that are so very severe, and I think the sense of injustice is still rankling there all the decades later.

“People want representatives to stand up and say it was wrong, and we were right to do what we did,” he goes on.

Walsh agrees, but says any commemorations must do more than just remember. “I don’t think there’s any point in celebrating something that isn’t going to change.

“If they’re going to talk about the changes that were made 50 years ago, I think they [the politicians] have to up their game and say we’re going to do more. Make sure that people feel safe, and make sure people feel we can work together.”