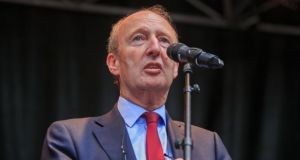 Members of the Independent Alliance have objected to being labelled the ‘auld fellas’ party’ by others in Government. Pictured is Minister for Transport Shane Ross.

The Government is expected to fully restore the Christmas bonus for all social welfare recipients in Budget 2019 next week.

Independent Alliance sources confirmed they had secured the move from Minister for Finance Paschal Donohoe following a meeting on Thursday evening.

It means social welfare recipients will effectively have the double payment, given at Christmas prior to austerity measures introduced after the financial collapse, will be restored this year.

The bonus payment is given to all welfare recipients in late November and was restored to 85 per cent last year. Alliance sources were trumpeting the move as a key budget achievement, and they are said to have secured a number of other smaller concessions from Mr Donohoe.

Sources also said the Alliance are now likely to accept significant changes to the special hospitality VAT rate, expected to rise from 9 per cent to 13.5 per cent for at least some sectors.

The Alliance were told they faced a choice of VAT rises or sharp increases in excise duty on diesel to fund other tax cuts and spending increases.

Proposals to help older people who want to convert family homes into sub-units they could then let out are also still under consideration.

There have been tensions between the Alliance and Fine Gael this week. Government sources have expressed exasperation that the Independent Alliance continually raises issues of concern to the elderly.

Members of the Independent Alliance have objected to being labelled the “auld fellas’ party” by others in Government.

Sean Canney, who left the Alliance but still supports the Government, has also been holding meetings with Mr Donohoe.