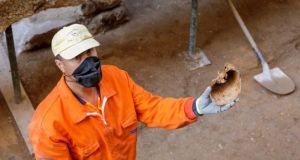 An image from day five of the dig on Valladolid’s Constitution Street, in Spain on Friday. Photograph: Twitter

Spanish archaeologists will on Monday begin a dig inside the remains of a chapel where they are “quite sure” Red Hugh O’Donnell is buried.

A week-long excavation of Constitution Street in Valladolid in northwest Spain has revealed the walls of what is believed to be the Chapel of Marvels where O’Donnell was buried in September 1602.

He died en route to Valladolid, then the capital of Spain, while waiting for a response from Spain’s King Philip III to a letter asking him to send another army to Ireland to fight against the English.

O’Donnell’s Irish and Spanish army was defeated at the Battle of Kinsale in early 1602 and he fled to Spain. Though the king never did provide the help sought, he gave O’Donnell (who died aged 29) a royal funeral, as outlined in the Annals of the Four Masters.

“His body was conveyed to the king’s palace at Valladolid in a four-wheeled hearse, surrounded by countless numbers of the king’s state officers, council, and guards, with luminous torches and bright flambeaux of beautiful wax-light burning on each side of him,” it said.

“He was afterwards interred in the monastery of St Francis, in the chapter precisely, with veneration and honour, and in the most solemn manner that any of the Gaels had been ever interred in before.”

It is the chapter, the part of the chapel where monks gathered for meetings, that the archaeologists believe they have found during their excavation.

“We have found a wall of the chapel. There is a place like it inside of the chapel which we are quite sure is the place where Red Hugh was buried,” said Carlos Burgos, who is acting as a translator for the archaeologists.

“Where we are going to start on Monday looks exactly like where investigators say was Red Hugh’s burial place.”

Mr Burgos, president of the Hispano-Irish Association, said a number of descendents of O’Donnell have been lined up for DNA tests if his remains are found. Among his closest descendents is Hugo O’Donnell, a Spanish-born military historian.

Visitors have come to Valladolid over the years looking for the remains of Red Hugh O’Donnell, but the Franciscan monastery containing the Chapel of Marvels disappeared in the 19th century.

Mr Burgos said the catalyst for the current dig was a visit by Donegal man Brendan Rohan to the city last year. Mr Rohan persuaded city authorities to conduct the ongoing dig.

Red Hugh is known as one of the heroes of Irish history. He and his father-in-law, Hugh Mór O’Neill, who between them controlled large parts of the north of Ireland, started the Nine Years’ War to drive the English out of Ireland.

It began promisingly and the Irish won a number of significant victories, but it eventually ended in defeat following the Battle of Kinsale, though hostilities continued after that.

Stories circulated that O’Donnell had been poisoned by an Irish traitor, James Blake from Galway, but it is more likely he died of an infection caused by a tapeworm. He was succeeded as ruler of Tyrconnell by his brother Rory, who along with Hugh O’Neill fled Ireland in 1607 in what became known as the Flight of the Earls. The latter event marked the end of Gaelic Ireland and the beginnings of the plantations of Ulster.

Mr Burgos said Red Hugh and Rory, who is buried in Rome, were laid to rest in the habits of the Franciscan order. The remains of Red Hugh could also be identified by his missing big toes, which were amputated following his celebrated escape from prison in the winter of 1591.

“Everybody is very excited about this,” Mr Burgos said. “This is very important for the Irish in Ireland and the Irish in America. All this is related to Spanish history and the relationship between Ireland and Spain against the same enemy at the time.”