Drimnagh house fire victims named as men in their 60s 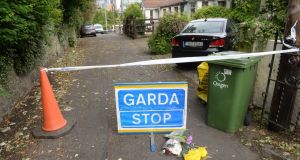 Two men who died in a house fire in Dublin on Saturday have been named locally as Joseph Muldowney and Derek Mangan, both believed to have been in their late 60s.

The fire, in a cottage at Lansdowne Valley, Drimnagh, broke out at about 1pm. Three units of Dublin Fire Brigade attended and the bodies of the men, discovered inside, were removed for postmortems later on Saturday.

Gardaí were investigating the cause of the fire at the scene on Sunday. Lansdowne Valley, a cul-de-sac off Slievebloom Park on the Long Mile Road, was cordoned off to everyone except residents. Several bunches of flowers were placed at the cordon, including a bunch of white tulips with a card signed, “From family and friends”.

Mr Muldowney had grown up in the family home and returned to live there in 2015 after the passing of his brother, who had occupied it previously. He was described by several neighbours as “very quiet” and “a man who kept to himself”.

The fire was discovered by a visiting granddaughter of neighbours of Mr Muldowney at about 1.15pm. She said she could smell smoke before she arrived at the cul-de-sac and then saw it coming from the windows and roof.

“I rang the fire brigade at about 1.20pm. I was banging on Joe’s door and shouting, trying to alert him. The fire brigade arrived about 1.30pm and it took them a few minutes to get the front door down.”

She said the Muldowneys had lived in the house for several decades and were well-known in the area.

A neighbour, whose father was related to Mr Muldowney, said: “He had moved back into the area in the last few years. He kept himself to himself, wasn’t married.” The neighbour said Mr Muldowney had a group of friends of men of his own age. “They’d have a few together, did no harm to anyone, and that’s the way he was, kept himself to himself really. I hope it was just some kind of accident.”

Sarah Keogh, a neighbour in her 70s, said she “only knew him to say, ‘Hello’.

“You’d see him coming along and you’d acknowledge him. I just think it’s so sad what happened. You wouldn’t like that to happen to anyone. I’ve never seen anything so sad, to think of two people dying like that, really and truly.”