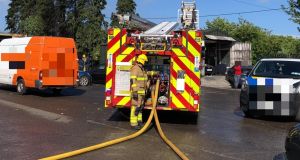 Luas services in Dublin were temporarily suspended for a time on Saturday while firefighters tackled a blaze at a Health Service Executive (HSE) building in Tallaght.

Dublin Fire Brigade were alerted to what it described as a “minor fire” at the building on Belgard Square at around 1pm.

There were no reported injuries as a result of the fire, according to the spokesman.

The HSE said arrangements had to be made to fly emergency call handling staff from Dublin to Co Donegal as a result of the blaze.

The fire was discovered on a shared balcony and garden area at its Rivers Building, which houses the National Ambulance Service (NAS) and National Emergency Operations Centre (NEOC), which deals with emergency calls.

All staff were evacuated after smoke entered the building.

“The NAS can reassure the public that service delivery and patient care was protected and business continuity was maintained at all times,” a HSE spokeswoman said.

“As per NAS contingency plans all the necessary procedures were immediately initiated which includes the redirection of all calls and dispatching to its sister site NEOC Ballyshannon and to the pre-designated area within Tallaght University Hospital.

“Arrangements were made with the Irish Air Corps and Irish Coast Guard to fly staff from Dublin to Ballyshannon to support to existing staff in NEOC Ballyshannon.”

The spokeswoman added: “We can confirm that no NAS personnel were injured during the incident.”

Luas operators tweeted there were no Red Line services running between Belgard and Tallaght “due to a fire close to the Luas tracks.”

Luas tickets were valid on Dublin Bus services during the stoppage.