Amorous cattle delight media as Kate and Will inspect the beef

Bored press pack seek translation, fashion advice and for the return of the cow family

Britain's Duke and Duchess of Cambridge continued their official visit to Ireland which included a walk along the Howth cliffs in Dublin and a visit to Jigsaw, a organisation providing youth mental health services in the capital's city centre. 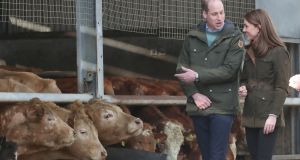 The Duke and Duchess of Cambridge during a visit to the Teagasc Animal and Grassland Research Centre at Grange, Co Meath. Photograph: Liam McBurney/ PA Wire

As the Duke and Duchess of Cambridge arrived in a shed full of beef cattle and chatted amicably with Teagasc staff about food production, one of the beasts who had been lined up to meet the royal pair got bored and started, well, humping his neighbour.

There was much delight among the assembled press pack with some of the photographers from the British newspapers vocally willing the unseemly scene to continue at least until the royals came into the yard.

But they missed their money shot by moments thanks to fast-acting staff at the farm in Grange, Co Meath who used a bag of feed and stern words to dampen the unruly yearling’s ardour.

Maybe he was as bored as the journalists waiting for Prince William and Kate Middleton. The royal couple were running late for their visit to the Teagasc Animal and Grassland Research Innovation Centre so, to pass the time, one of the British press pack had started reading a press release on the previous day’s activities.

What does “a do-hane UA sail” mean, he asked a couple of local journalists as he read the comments made by Prince William at the Guinness Storehouse on Tuesday night. “Is it Gaelic?”

“A dhaoine uaisle,” came the response after some confusion before a translation of sorts was provided.

“I think it means ladies and gentlemen,” the Irish reporter said.

A cow wandered across a nearby field with her two calves following close behind to see what the commotion was about. The cow family got bored quickly and wandered off again.

“Can you bring the cows back please?” a photographer shouted at a Teagasc staff member who was waiting for the royals. He responded with a withering, “No, they’ve gone up the field now.”

One of the duke and duchess’s advance team approached the journalists and said the pair’s arrival was imminent. She asked, in a pleading voice, for restraint to be shown when they arrived.

“Don’t be climbing over everything.”

“We’re not the animals,” a photographer said.

There was a moment’s silence after that.

Then the Garda helicopter burred overhead signalling the arrival of the convoy. The couple hopped out of the car and walked through the farm in the company of director Eddie O’Riordan and beef scientist Paul Crossan.

“Can you see what she’s wearing?” a harsh voice shouted.

“She’s got an old Barbour on,” came a response from the crowd.

As it happens Kate was giving her first nod on the three-day trip to Irish fashion and her jacket was from Dubarry. Her blouse was from Barbour.

When the pair disappeared briefly, an impatient photographer asked what they were doing.

“They’re looking at cows,” he was told.

They were actually talking about the importance of farming, sustainability and the environment with O’Riordan and Crossan.

“They were very knowledgeable and particularly interested in the farm-to-fork concept and the distance between consumers and food production,” Crossan said after the tour ended. “They were also both very interested in countryside stewardship and the important role farmers have to play in that.”

Crossan said they had discussed farm sustainability and “whether or not farmers are being adequately rewarded for what they do. They were talking about how in an increasingly urbanised world, consumers do not realise exactly how food is produced.”

As well as meeting Teagasc staff, the Royal pair also met 4th class children from the nearby Kilteal National School.

Among the children was Ava O’Connor. “It was really exciting,” she said. “I talked to them about how our school promotes healthy eating and how important it is.”

Michael Kane was another one of the pupils who got to meet the Duke and the Duchess. “They were lovely and seemed really interested in healthy eating and how important it was not to eat too many sweets. I do like chocolate but I don’t eat too much of it,” he said.

Their principal, Eileen O’Reilly, said the couple had told her they loved their trip to Ireland and wanted to return with their three children.

“They said they would like to come back here with the kids and do a cycling tour and see the Irish countryside,” she said.