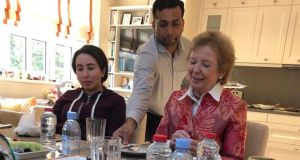 Amnesty International Ireland has supported calls by lawyers for Princess Sheikha Latifa for an independent delegation be sent to Dubai to investigate her conditions.

Such a move could establish “if she is being detained against her will,” according to the organisation’s executive director Colm O’Gorman.

The group Free Latifa, has called on the UN to send independent legal and medical professionals to Dubai to assess the 33-year-old woman’s situation.

The princess, a daughter of Sheikh Mohammed bin Rashid al-Maktoum, had not been heard from since she was seized from a yacht off the coast of India in March as she attempted to flee Dubai.

In a video that she instructed friends to release if she was stopped, Latifa said she spent seven years trying to flee a gilded prison and feared torture if captured.

Photographs of former president of Ireland Mary Robinson with Latifa were released by the princess’s family on Christmas Eve to rebut what they described as “false allegations” that she was taken home against her will.

Mrs Robinson, who visited the princess in Dubai earlier this month, described her as a “troubled” and “vulnerable” young woman who has a “serious medical situation” and was “in the loving care of her family”.

However, Mrs Robinson has face criticism over her visit, with some campaigners claiming the former United Nations High Commissioner for Human Rights had been “used as a willing pawn in the PR battle” between the family that rules the United Arab Emirates “and the rest of the world”.

Mr O’Gorman said last night that while he “didn’t have enough information” about what Mrs Robinson saw in Dubai, he remained concerned about the princess’s treatment in the past and the circumstances of her return to the country.

He said the controversy surrounding Mrs Robinson’s visit should not be allowed distract from the grave concerns around the “worrying” treatment of the princess.

Liam Herrick of the Irish Council of Civil Liberties said the case was “not something we would comment on as it is an international story”.

A source close to Mrs Robinson said last night the cost of Mrs Robinson’s flights to Dubai and other expenses had “probably” been covered by Princess Haya bint Hussein, a sister of the late King of Jordan and friend of the Robinsons.

“She spent many years in Ireland involved in showjumping,” the source said of Princess Haya.

In a statement last Friday Mrs Robinson said she was “dismayed at some of the media comments on my visit and I would like to say I undertook the visit and made an assessment, not a judgement, based on personal witness, in good faith and to the best of my ability.”

She had visited Dubai “to meet the princess at the request of Princess Haya bint Hussein, one of the wives of the Sheikh. I have known and worked with Princess Haya for many years in her capacity as a member of the UN Global Humanitarian Forum and as a UN Messenger of Peace. I was aware of the international concern over Sheikha Latifa and that she had not been seen for many months so when Princess Haya asked me to go to Dubai to meet with both of them I agreed, without hesitation.”

Sheikh Al Maktoum has extensive horse racing interests in Ireland and in 1992 he agreed to sponsor the construction and operation of a purpose built Islamic Cultural Centre to provide new facilities for the Dublin Muslim community.

Construction of the Islamic Cultural Centre began in 1993, and it was officially opened by then president Robinson and Sheikh Al Maktoum on November 16th, 1996.