In Ireland, the Army conducted nearly 200 operations at request of An Garda Síochána 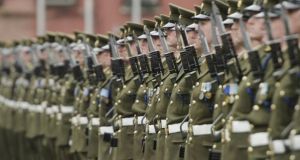 At present, there are 650 personnel serving abroad, the bulk of them (462) deployed with the UN Interim Force in Lebanon. Photograph: Alan Betson

Almost 1,700 members of the Defence Forces served in United Nations and Irish Government-mandated operations in 14 countries around the world in 2018, according to data published on Friday by the military.

In addition, at home, the Army conducted almost 200 operations at the request of An Garda Síochána, many of them involving explosive ordnance disposal carried out by bomb disposal experts from the Ordnance Corps, as well as assisting in search operations and a variety of escort types.

In a yet-to-be-finalised audit for the year, a picture emerges of the wide range of activities carried out by the Defence Forces.

A total of 1,692 personnel served in UN peace support and security operations in 14 countries and in one ongoing naval operation.

At present, there are 650 personnel serving abroad, the bulk of them (462) deployed with the UN Interim Force in Lebanon where in November, an increase in deployment by 100 personnel saw the Irish contribution reach full UN battalion level.

In addition in the Middle East, Ireland has 138 personnel deployed in Syria and the Israeli-occupied Golan Heights. They are with the UN Disengagement Observer Force (Undof), where in October 2018 they completed a relocation from Camp Ziouani in the Golan Heights to Camp Faouar in Syria.

The Irish operate a rapid reaction force that offers protection to Undof observers, manning observation posts in an area of separation between Syria and the Golan, south of Mount Hermon on the Syria-Lebanon border.

At sea, two of the Naval Service’s most modern vessels, the LÉ Samuel Beckett and the LÉ James Joyce, were deployed in rotation to the southern Mediterranean off the coast of Libya. They were part of the European Union’s NAVFOR Med Operation Sophia as part of its maritime mission to disrupt human smuggling and trafficking.

A counter improvised explosive device (C-IED) team travelled to Ouagadougou in Burkina Faso in western Africa to train local soldiers in C-IED. They are expected to return next year.

At home, thousands of Defence Forces personnel were deployed in several support operations, both security and weather-related, and provided armed guards for key installations, such as Portlaoise Prison, the Central Bank and explosives depots.

They included 197 assists to the Garda with bomb disposal, prisoner, cash and explosives escorts, and search operations that involved more than 1,222 personnel.

Approximately 2,861 personnel were deployed to assist civil authorities during multiple operations, including combating gorse fires in Dublin, Wicklow, Limerick, Tipperary, Wexford, Down and Armagh, according to the audit.

Outside of its contribution to Operation Sophia, the Naval Service patrolled 220 million acres of ocean off Ireland’s west, southwest and northwestern coasts – an era 12 times the land mass of Ireland and representing some 15 per cent of the EU’s fisheries.

The fleet also carried out some 740 boarding operations to date and detained seven vessels for alleged infringements of fishing regulations.

Next year, the formal naming and commissioning ceremony will be held for the Navy’s ninth ship, LÉ George Bernard Shaw.

The Defence Forces inducted 492 recruits, 32 of them women, and 98 cadets, 11 of them women, in the past year. Sixteen of the officer cadets began their careers in the enlisted ranks. Some 210 personnel graduated in third-level honours degree courses, and six completed masters-level courses.

In addition, almost 2,000 personnel took a variety of skills and career courses to develop leadership, planning and decision-making capabilities, and avail of promotion opportunities.

Personnel also took part in more than 50 major military and State ceremonial events over the year, including State visits, ceremonies involving the President, and State anniversary events and commemorations.