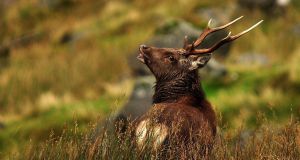 Wicklow accounts for over a third of all deer shot by licensed hunters in Ireland in the last hunting season, and a high concentration of deer in certain areas has been linked to outbreaks of TB. Photograph: Wild Deer Association of Ireland

Plans to cull possibly thousands of wild deer in Co Wicklow are to be stepped up next month with the setting-up of teams to police animal populations in three “hotspot” areas.

Three “deer management units” (DMUs) are due to be in place in separate locations in the county by the end of January 2019, according to the Wicklow Uplands Council, which has been awarded a €120,000, three-year contract from the Department of Agriculture to tackle the growing deer population in Wicklow.

While initial reports suggested tens of thousands deer could be culled, the council – a voluntary body representing Wicklow farming, tourism and community interests – said no reliable estimate could be given and part of the job of the DMUs would be to gather information on deer populations across the county.

Wicklow accounts for over a third of all deer shot by licensed hunters in Ireland in the last hunting season, and a high concentration of deer in certain areas has been linked to outbreaks of TB.

He anticipated an increase in the number of deer shot in the three areas where DMUs were to be set up.

“These areas will be targeted as ‘hotspots’ due to the adverse impacts of deer but I honestly cannot say whether the overall ‘cull’ figure will increase countywide,” he said.

He added the final three locations had yet to be decided under the project, which is being run in conjunction with Wicklow Deer Management Partnership (WDMP).

There would be “a collaborative action plan between landowners, hunters and key stakeholders”, he said.

Chairman of the WDMP Pat Dunne was keen to point out that the contract was not awarded for a major cull. He insisted that sustainable management was key and explained that WDMP could look at measures such as shooting more female deer in hotspots.

Mr Dunne, a former IFA National Hill Farming chairman, said some hunters were only interested in killing the very best stags, or trophy animals, and this was harmful to the overall health of deer populations.

Having spent his life farming in Wicklow, he said he had witnessed the disappearance of the native red deer from the county. “He stayed out on the mountain, he stayed in the high land, he wasn’t causing any problems in the lowland.

“I am seeing more and more deer now down at the lower levels then there used to be,” he continued.

Disease was a worry and he pointed to a recent joint WDMP and Department of Agriculture operation in the Calary area of Wicklow when 130 deer were shot.

“There was a couple of big outbreaks of TB in cattle in the area at the time,” said Mr Dunne. The 130 animals were tested and 16.5 per cent had TB, he said.

The Irish Cattle and Sheep Farmers’ Association (ICSA) said deer numbers were out of control in Wicklow and posed a hazard to traffic and a threat to their livelihoods. They want professional shooters brought in to conduct a major cull.

ICSA Wicklow chairman Tom Stephenson said the deer sheltered in Coillte woodland where farmers could not legally shoot them but they moved on to farms to feed. “There is no sustainable income coming in from the deer for us and we are actually feeding the deer. There’s bed and breakfast, Coillte do the bed and we do the breakfast,” Mr Stephenson said.

As with many farmers, Mr Thompson also suspects deer transmit TB and the ICSA has called for mandatory TB testing on culled deer.

“There is some of the deer having twins now,” Mr Stephenson added. He claimed this was unheard of before and was happening now because the animals were so well-fed as they were on lower ground living off farmland.

Irish Deer Commission (IDC) spokesman and hunter Damien Hannigan said the situation in Wicklow was complicated, noting there was no deer census for Ireland and the exact population was unknown.

Citing National Parks and Wildlife Service deer returns for animals shot by licensed hunters, Mr Hannigan said Wicklow accounted for 13,367 of the 37,241 deer returns last season. He pointed out that these figures, while the best available, represent returns sent in by licensed hunters and were not verifiable. The number of deer shot illegal or poached remains unknown.

While welcoming the new contract, Mr Hannigan said farmers and hunters needed to work closely together to resolve issues with wild deer. “We feel the void has grown between hunters and farmers. What we are aiming for is working in partnership with landowners – that is the only way we will solve this.”