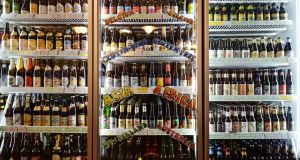 The Public Health (Alcohol) Bill should be passed in its entirety including a provision to introduce minimum unit pricing on alcohol, a Senator has said. Photograph: Alan Betson/The Irish Times.

About 85 per cent of men over the age of 40 who took their own lives in Cork in the last nine years had a history of alcohol abuse, a public meeting has heard.

Prof Ella Arensman, of the National Suicide Research Foundation, told the meeting that research into suicide in Cork city and county since 2008 found that among men under the age of 40, including adolescents, who took their own lives, some 55 per cent had a history of alcohol.

She said this highlighted that there was clear evidence of a link between alcohol abuse and suicide.

“Our research has also found that since the recession, between 2007 and 2010, when alcohol prices in Ireland reduced, there was a 30 per cent increase in the number of people presenting with self harm at the emergency departments in Ireland and the majority of these cases were alcohol related,” she said.

“This contrasts with the situation in England, Scotland and Northern Ireland where alcohol prices went up so the Irish experience clearly shows a relationship between the price of alcohol and the incidence of self harm.”

Prof Arensman, who was speaking from the floor at a public meeting on the Public Health (Alcohol) Bill organised by Senator Frances Black, said the Bill should be passed in its entirety including a provision to introduce minimum unit pricing on alcohol.

She said other countries already had such legislation on their statute books and failure to pass the Bill, which was drafted by Taoiseach Leo Varadkar when he was minister for health, would result in Ireland falling further behind other EU countries in terms of public health policy.

Joe Barry, professor of population health medicine at Trinity College, Dublin, paid tribute to Ms Black for keeping focus on the legislation, which he described as “an honest attempt to deal with the growing problem of alcohol abuse in Irish society”

“The minimum unit provision won’t affect the price of drink in pubs - it is really about getting away from cheap drink in off-licences and shops so that someone for example won’t be able to go out and buy a slab of 24 cans for €18,” Prof Barry said.