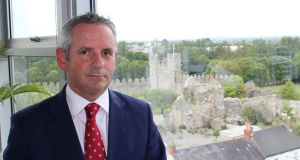 Paul Reid said Fingal County Council ‘can’t sustain the level of services that we are providing right now’ if the percentage of tax paid by homeowners is not increased this year. Photograph: Jack Power

Chief executives of Fingal and Dún Laoghaire-Rathdown county councils will on Monday ask councillors to increase the rate of local property tax paid by householders.

The Fingal council chief executive Paul Reid has warned the local authority will have to cut services if councillors vote to leave property tax rates unchanged this year.

Mr Reid said Fingal council “can’t sustain the level of services that we are providing right now” if the percentage of tax paid by homeowners is not increased this year. The local authority’s upcoming budget for 2018 is set to run a deficit of approximately €8 million, according to one source in the council’s management, if the property tax take is not increased.

In Dún Laoghaire-Rathdown chief executive Philomena Poole has told councillors the alternatives are to increase commercial rates, or to increase discretionary charges such as housing rents, parking or cemetery fees or gate fees at Ballyogan recycling centre.

Councillors can vote to vary property tax rates by a maximum of 15 per cent each year. If they vote to reduce it by the maximum rate of 15 per cent it effectively means homeowners bills remain the same (at 85 per cent of what they would otherwise be).

The four Dublin local authorities are the only councils in the State that voted to keep property tax on homes reduced by the maximum 15 per cent for the past three years.

The changes are not cumulative, so the starting rate is the same each year.

Ms Poole is requesting Dún Laoghaire-Rathdown council members to reduce local property tax by just by 5 per cent this year, instead of the 15 per cent voted through by councillors last year. In a briefing note for councillors she said the variation would raise just over €5 million, and it would effectively mean property tax in the area would rise by 10 per cent.

Mr Reid said the council’s budget this year was facing significant upward pressures, due to the new Government public service pay deal, and other costs.

Last year Fingal voted overwhelmingly to reduce the tax by 15 per cent for the year, by a vote of 28 councillors to nine. Fine Gael, Fianna Fáil, Sinn Féin, Solidarity and People Before Profit all sided together, and only Labour, the Greens and three Independent councillors voted against reducing the property tax by the maximum amount.

Labour councillor in Fingal Brian McDonagh said councillors calling for an increase in expenditure on things such as housing “need to be prepared to take responsibility for raising revenue” as well.

Cllr Paul Donnelly said Sinn Féin would be voting to keep the rate of tax reduced at 15 per cent again this year. “We made a very clear commitment in 2014 local elections to the people that we would reduce the tax,” he said. Solidarity Cllr Matt Waine also said his party had “every intention” of voting to reduce the property tax by 15 per cent.

Fianna Fáil and Fine Gael councillors are considering their stance on the upcoming vote, in light of the budget deficit for 2018. Fine Gael councillor Anthony Lavin said “you have to live in the real world and consider things like budget pressures. Homeowners ability to pay is also a little bit better than two years ago”.

Fianna Fáil councillor Darragh Butler said his party’s “default position” would be in favour of reducing the tax by 15 per cent again. “We haven’t made a full decision yet, and we’re still listening to the arguments being put forward,” he said.