Pat Dawson, the CEO of the Irish Travel Agents Association, has told the Oireachtas Transport Committee that airlines operated virtually empty ghost flights out of Ireland over the summer to avoid paying refunds. Video: Oireachtas TV 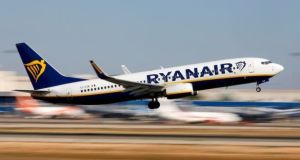 Airlines owe at least €25 million to Irish consumers as a result of Covid-19 related flight cancellations with some of outstanding refunds dating back to the beginning of the crisis in March still not processed, an Oireachtas committee has been told.

At the hearing, Ryanair was accused of dragging its heels when processing refunds and playing different strands of legislation against each other in order to avoid returning money to travel agents which could subsequently be passed on to consumers.

The Oireachtas Transport Committee was also told on Wednesday airlines had been operating virtually empty ghost flights out of Ireland over the summer months to avoid issuing refunds to passengers unable to travel as a result of official restrictions imposed as a result of Covid-19.

The chief executive of the Irish Travel Agents Association (ITAA) Pat Dawson said Ryanair was refusing to pay money back to travel agents on the basis that EU Directive 261 which governs flight refunds in the event of cancellations requires them to pay money directly to consumers.

The Package Travel Directive meanwhile requires travel agents to refund consumers in the event that holidays - including flights - have been cancelled.

Mr Dawson said that despite the fact that it had been “dealing with travel agents for 20 years” Ryanair had changed course in recent months and instead of simply channelling refunds through travel agents it was deploying delaying tactics.

He said it was demanding details such as utility bills and bank account details from customers before considering direct refunds.

Mr Dawson told the hearing that travel agents were in “a desperate, desperate situation” and effectively had “been at level 5 since March. We have been in lockdown since March” and had been “burning cash” since the start of the crisis and most of our time has been spent chasing refunds.”

“Travel needs certainly and we have no certainty,” he said and stressed that in addition to operating ghost flights, airlines had put enormous pressure on “ordinary families” by charging them close to €1,000 to change flight dates with many unable to afford the extra fees and losing holidays as a result. He called on the Government “to stand up and protect the public”.

He called on the Government to insist that if official advisories are in place warning against non-essential travel to certain countries than airlines should be obligated to process refunds for people who follow that advice.

Mr Dawson also said travel insurance had been shown to be not “worth the paper it was written on” with companies directing people to the travel agents rather than paying out on policies as a result of lost holidays.

The Government was also accused of failing to act on recommendations made by the Aviation Task Force last July.

The chairman of the task force, entrepreneur Chris Horn expressed frustration that Irish businesses were at a disadvantage to counterparts across Europe as a result of the restrictive travel rules in place in Ireland.

He said it had been “three months since we made recommendations and it would appear to me that some of those recommendation had not been acted upon”.

A board member of the ITAA Paul Hackett said the Government had gone on several “solo runs”, particularly when it came to international travel in recent months.

He contrasted restrictive rules in Ireland with the manner in which the crisis had been handled in Italy, which was at the epicentre of the Covid-19 crisis in March. He said that it opened up for overseas travel in June and “has done so safely” with a considerably lower rate of Covid-19 than Ireland.

He highlighted the importance of travel and tourism to Ireland and said it restrictions had left the “economy in freefall”. He pointed out that the authorities have been “treating travel like a pariah yet we can still travel north of the border” where the rate of incidence is much higher than many countries across the EU.

He called for a testing system to be introduced across Irish airports as a matter of urgency. “If we can return to safe travel by getting testing at airports than we need to do that,” he said.