Covid-19: ‘Things may get worse before they get better,’ says Taoiseach amid record new cases 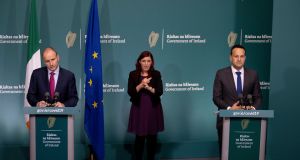 Warning that “things may get worse before they get better”, Taoiseach Micheál Martin on Wednesday night moved three Border counties to Level 4 restrictions, tightened Level 3 for the rest of the country and appealed to people to stop visiting each other’s homes to control the spread of Covid 19.

During a quickly-arranged meeting at Government Buildings, the Cabinet decided that Cavan, Monaghan and Donegal would move to Level 4 of the Government’s Living with Covid plan until November 10th, after public health advisers warned of rapidly rising Covid numbers in the counties.

Ministers also opted to approve a nationwide ban on visits to homes or gardens in almost all circumstances, and a series of other restrictions, though the rest of the country would remain on Level 3 for now, Mr Martin said.

The sudden move last night followed a decision by the Northern Executive to introduce sweeping new restrictions across Northern Ireland after several days of steeply rising infections there. First Minister Arlene Foster told the Assembly at Stormont that the hospitality sector will shut down for four weeks from Friday while schools will close for two weeks from Monday.

But it was also in response to rising numbers of infections in the Republic, which on Wednesday saw 1,095 new cases, its highest daily number on record, reported to the health authorities. There were also five further deaths reported.

Under Level 4 restrictions being introduced in the three Border counties, non-essential retail will close, people should not have any visitors to their homes, the maximum number of attendees at a wedding is now six, and all non-essential workers will work from home, Mr Martin told a press conference at Government Buildings. However, he said construction and manufacturing will remain in operation under the right conditions.

Under the new restrictions for the Level 3 counties, people will be allowed to meet in groups of up to six people from up to two households in outdoor public areas. The exemption for club championships will be removed and sports teams will be told they cannot train unless social distancing can be observed.

Mr Martin said that data from Northern Ireland is “hugely worrying” and that discussions with Stormont would continue in the coming days. But he said figures in the Republic were also “very worrying” with 190 cases per 100,000 nationally, rising to 571 per 100,000 in Cavan. The implications for local hospitals and public health are “obvious and very serious”, he said.

“We are living in difficult times and things may indeed get worse before they get better”, Mr Martin added.

Tánaiste Leo Varadkar said, “We know that a lot, if not most, Covid transmission is happening in private homes”.

“Sometimes people associate that with house parties, but it’s not just that,” he said. It was family gatherings, and friends coming over for a drink or cup of coffee. “All those things have to stop,” he said.

Mr Varadkar also noted that “it is more likely more counties will move to Level 4 than the reverse”.

Ms Foster made her announcement on a day when a record 1,217 confirmed new coronavirus cases were reported by the North’s health department, bringing the total number of cases since the coronavirus outbreak to 23,115. There were also four more deaths reported.

In Dublin, there is an intense debate in Government over a potential move to Level 4 nationally.

Chief medical officer Tony Holohan has continued to advise Ministers that the entire country will have to move to tougher restrictions as soon as possible to contain the virus. However, the Taoiseach, some Ministers and senior officials are reluctant to consider such a move until the restrictions introduced last week, and the latest measures, are given a chance to work.

A move to Level 4 nationally has been estimated by officials to cost €100 million a week, and would result in the loss of 130,000 jobs.

In the Dáil on Wednesday night, Fine Gael TD Joe McHugh expressed concern about the impact of the move to Level 4 on retailers in Border counties and particularly in his constituency of Donegal. He said it would be badly affected because shops in Northern Ireland would remain open.

Government backbenchers appealed in the Dáil for extra supports to be provided to the counties to assist small businesses.

1 Cork shootings: ‘Devastation was impossible to imagine’, funeral hears
2 Storm Aiden prompts nationwide weather alerts for Halloween
3 Strong earthquake with a magnitude of up to 7 hits Turkey and Greece
4 US election: ‘Trump would not be caught dead here unless he wanted our votes’
5 The real Contagion virus is out there and it’s causing virologists to worry
Real news has value SUBSCRIBE