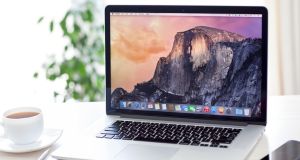 A woman placed an order on Apple’s website for a laptop and was promised a delivery date in early May. Photograph: iStock

Apple has fallen foul of the Irish advertising watchdog after failing to deliver a product to a customer in a promised time frame while a radio station was also rapped across the knuckles for using a contentious image of the Old City of Jerusalem in an ad for a travel competition.

The tech giant was the highest profile company included in the latest raft of upheld complaints by the Advertising standards Authority of Ireland (ASAI).

A complainant placed an order on its website for a laptop and was promised a delivery date in early May. However, four days later she received an email telling her the product would be with her almost three weeks later as there were more orders than anticipated.

Classic Hits also had a complaint against it upheld. A person complained about the use of an image of the Old City of Jerusalem, specifically the Walls of the Armenian Quarter, when taken alongside the text “Fly to Israel for as little as €319, from May 2020. Enjoy a sunset on Tel Aviv beach, tour the historic city of Jerusalem or float in the Dead Sea.”

The view was that this was clearly intended to convey that Jerusalem’s Old City was part of Israel and not “occupied and illegally colonised area”.

He said this was universally recognised as such in International Law, and by the UN Security Council, by the UN General Assembly, by the European Union, by the Irish Government, and by all major human rights organisations.

Defending the promotion, Classic Hits said the article and the accompanying picture were providing information on that week’s breakfast show competition and had highlighted a number of activities that a prize winner could potentially engage in while on their trip to the region.

The defence said the article “had made no reference to the nationality of the activities/attractions featured. They disputed that the use of the image in the article had been clearly intended to convey that the Old City was part of any particular country other than being a tourist attraction in the region”.

They said it had “never been intended to imply that any area mentioned was in a particular (political) jurisdiction. They said the on-going dispute in relation to Jerusalem, which had been well documented over a number of decades had not been highlighted in the article and they considered that it would be unreasonable to expect these issues to be covered in such an article.”

The ASAI committee acknowledged it “had not been the advertisers’ intention to imply that any area mentioned in their advertising was in a particular (political) jurisdiction”.

It said the advertisement had included the statement “Begin your exciting journey to Israel …” and featured a number of destinations, including Jerusalem and its Old City Walls.

“As the Old City was not recognised by the international community as forming part of Israel, the committee considered that the reference to “begin your exciting journey to Israel” was likely to mislead.

A complaint was made against the Shaw Academy as a complainant believed an advertisement was deemed not to be offering free access but a free trial of a paid subscription service, which was difficult to cancel during a free trial period.

The complainant “considered that the free trial did not give unlimited access, as indicated in the advertisement, and only allowed students to complete one module of a course”.

They also considered the photograph of a diploma to be misleading “as it was not possible to gain a diploma in four weeks. She also said the essential course materials cost extra and were not included in the free trial”.

The ASAI committee noted that students could sign up for a 4-week free access and that there were no limits to the number of courses that they could attend during all stages of their Shaw Academy membership.

Imagine acknowledged but did not respond to the complaint so it was upheld.

There were also complaints upheld for people and companies who failed to properly indicated that content on social media was paid for by advertisers.