Adapting to survive: ‘Mohill was a dead town but it is reinventing itself’ 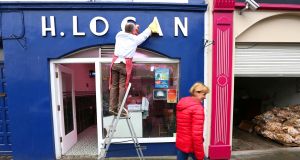 Author John McGahern described Mohill, Co Leitrim as beautiful “in its plain way”, and said the first sign that winter was over was when he saw bags of seed potatoes and bundles of cabbage plants on the corner outside Luke Early’s bar on Main Street.

Early’s bar closed some years ago, and Mohill experienced a slump familiar to many similar-sized places around the country, but the town is looking picture-postcard pretty now with 40 properties freshly painted.

Joe Lowe, of Leitrim County Council’s local enterprise office, believes that the paint job has sparked a much-needed feel-good factor. “Mohill was a dead town but it is reinventing itself,” he says. “There is no foreign direct investment in Mohill.”

The town is proud of its links with McGahern, who was a regular at the local mart. Some reckoned he spent more time observing the humans than the animals.

“I dream of solar panels over the mart,” says Lowe. An energy master plan is key to proposals which were unveiled in Mohill on Monday at the Smart Towns and Villages National Conference, billed as an opportunity to revitalise rural Ireland.

People don’t look for breakfast rolls anymore. They want something tastier like a dash of pesto on their ciabattas

Local county councillor Enda Stenson knew he was in trouble when he saw the headline “Mohill town is dying” on the front page of the Leitrim Observer in February 2017. His blunt comments caused a furore. But Stenson believes he was right to highlight the need for action to save his local town. “Well, I was a referee for 33 years so I had been called a lot of things,” he says.

Locals had got used to walking past shuttered shops in the once bustling market town and many families communicated on Skype with sons and daughters in London, Sydney and elsewhere.

Around that time, Stenson’s brother Gerry shut down his hardware store on Hyde Street after 25 years, a victim of the downturn in the building trade.

However, last Friday there was a buzz in town again as his brother’s family served free coffee and scones at the official opening of their new grocery and coffee dock in the former hardware store.

Gerry’s son Joe Stenson says local businesses have to adapt to survive. “Coffee is the big thing here. People don’t look for breakfast rolls anymore. They want something tastier like a dash of pesto on their ciabattas.”

Almost every shop in town has been painted, energy audits have been carried out at several local businesses and plans are afoot for a solar farm, possibly on the site of the former town dump. Meanwhile, award-winning chef Sham (Shamzuri) Hanifa from the Cottage restaurant in Jamestown has been showing local children how to make homemade burgers and sweet potato chips in the revitalised Youth Cafe.

Dozens of local authority homes and some public buildings have been retrofitted to make them more energy efficient. A lot of the work has been funded courtesy of the Government’s Towns and Villages Renewal Scheme.

Jacinta Colreavy, a Mohill Community Network member, applauds what is happening, but strikes a note of realism by pointing out that while the shopfronts look good, many are still empty. “We don’t want to be all shirt front and no back.”

Local barber Michael Wall, who is also enthusiastic about “the positivity” around town, says that if owners of the many vacant premises were forced to pay the equivalent of rates, they might not all stay closed.

There is a nice buzz around. People are back and one partner is going to Dublin maybe two or three days a week

“Business has been good for the past two years. I have guys coming in who came home and are starting families here,” Wall says.

His wife, Susan, runs a hairdressing salon from the same premises. She points out that many returned emigrants are happy to commute to Dublin from Dromod train station a few kilometres away.

“There is a nice buzz around. People are back and one partner is going to Dublin maybe two or three days a week,” she says. New hot desk facilities at the revamped Mohill Enterprise Centre are also in demand with remote working the new reality for many.

The county council has asked Enterprise Ireland to help it identify large companies who might be open to relocating some staff to Mohill, attracted by “state-of-the-art” schools and affordable housing.

Carpenter Kevin Gordon came home a few years ago, having spent two years in Australia making money to build a house for his family. “The baby was seven weeks old when he left,” says his wife Talitta. “He worried that she did not know who he was.” The couple has five children and a home in Mohill now.

Enda McHugh who runs Mohill Tyre Centre spent five years in Australia but is back to stay having got married three weeks ago. “A lot of my friends came back too,” he said.